Aamon is an character in Dragon Quest IV. He is a powerful mage-like monster and subordinate of Psaro the Manslayer.

Aamon in his normal form resembles a Vis mager from Psaro's own army. He can also take on the form of a human priest. When faced in the Diabolic Hall, he takes on Psaro's evolving monster forme, eventually reaching full forme and even a color change.

Aamon proves to be a backstabber, using Psaro's faith in monsterkind to avoid suspicion and trigger the events that would lead to the final battle of IV. His original hope was that Psaro and the Hero's party would destroy each other in their battle, enabling him to ascend to Psaro's position as master of all monsters. He puts a great deal of effort into this plan, somehow surviving his first run-in with the Hero and later perfecting the Secret of Evolution in the event that something went awry, if not to also give him the power to crush the opposition.

Though he appears to be a mere lackey, he actually sets in motion much of the endgame. By having Rose killed by the humans, he causes Psaro to fly into a rage and take the throne as King of Nadiria. His dialogue suggests that he intends to eventually take that role as his own, and indeed, in Chapter 6 of the PlayStation, Nintendo DS, and Mobile remakes, he has used the Secret of Evolution on himself and achieved his goal. However, after reviving Rose, Psaro and the Chosen are able to defeat Aamon and restore the world to its rightful state of affairs.

Aamon is first battled at the barrier tower in Nadiria. He is flanked by three drooling ghouls.

In the remakes, Aamon resurfaces in Chapter 6 as the true final boss, having survived his run-in with the hero at Nadiria to assume control of Diabolic Hall. Much like Psaro the Manslayer, he has several forms:

Added as part of the 2nd card series. 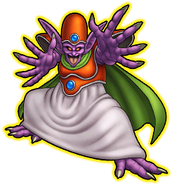 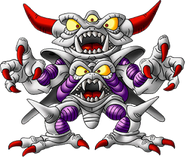 Retrieved from "https://dragonquest.fandom.com/wiki/Aamon?oldid=200393"
Community content is available under CC-BY-SA unless otherwise noted.