A fine sword fighter with incredible feminine charm to boot. Raised by the Roamer Tribe, her dancing skills are second to none. But a sorrowful glint in her eyes suggest a troubled past.
— Dragon Quest VII game manual

VII
Aishe, known as Aira in Dragon Warrior VII, is a character from Dragon Quest VII. She is a member of the Roamer tribe, but has shown some restlessness recently.

Aishe is an attractive young woman with tan skin, long flowing dark hair that reaches past her shoulders. She wears red lipstick and silver hoop earrings. Aishe is similar in dress to Kiefer. She wears an abbreviated red jacket that she leaves open and red leather gloves. She also dons a leather bra and with red bikini bottoms. Draped around her waist is a tattered cloth that she wears like a skirt. Around her neck, she wears a metal choker connected to her bra with leather straps. She wears tall red leather boots with straps and metal bands around her thighs. Slung on the back of her waist is a scabbard with the Sword of the Roamers, with which she is quite proficient. In appearance, she looks like a dancer and a warrior, which fits her nicely.

In fact, many people from Estard, including King Donald and Princess Lisette, feel a connection to her, even though they have never met before, pushing the implication that Aishe is the descendant of Kiefer.

Aishe is quite the forceful person. Whatever she decides to do, she does with no regards to the consequences. Many of the tribe find it hard to tell her what to do or what she should do. In fact, during her initiation as the tribe's lead dancer, she walked out from the tent where the initiation was taking place, upset with the way the chief was playing the torban. During this, no one was able to stop her for fear of her swordsmanship. She finds that she is restless with the way of the Roamer Tribe. She wants to go and find new adventures.

However, this isn't to say that she is a brat. On the contrary, she is very dedicated to reviving the Almighty. Her reason for joining the party, first and foremost is to find a person to play the legendary Torban of Truth.

Aishe is a very principled person, often refusing to compromise on her morals. She is quick to show compassion for troubled people around the world. She is very proud of her Roamer heritage and culture, and can become angry when she feels her people are being disrespected. She is mostly calm and patient, despite her hot-headed side. She is equally proficient in both dance and swordsmanship.

She shares an unusually strong bond with Princess Lisette, stating that she sees her as a younger sister. King Donald also quickly develops an affinity for Aishe, asking her to stay on in Estard as Lisette's tutor at the end of the game.

In the 3DS remake, if the player decides to look in a mirror while Aishe is the first character in the party line-up, she will agonize over her appearance. She will also comment on her outfit, smile at herself, strike a dancer's pose, comment on the usefulness of mirrors, use her sleeve to clean the mirror, wink at herself, fix her hair, wonder if she's put on weight, and ponder if she should start using a new lipstick.

Not much is known about Aishe's past, except that she was trained to lead the Roamer Tribe in dancing. Someone also taught her to fight with the sword, as she is very proficient in this art as well.

During the initiation to become the tribe's dancer, Aishe walks out of the tent where she is performing. She heads to a cliff by a waterfall where the Hero and party catch up to her. She asks them who they are and they introduce themselves. Aishe believes that they were sent by the Chief of the Roamers. She explains that she has no desire to be a dancer. With that, she returns to the Roamer camp.

When the party arrives, they find Aishe and the chief having a heated discussion. Aishe wants to find the legendary Torban Player, but the chief doesn't want her to leave. As the party enters the tent, Aishe quickly uses them to her advantage. She tells the chief that she will be in their capable hands. The chief asks the party if this is true. The Hero responds in the affirmative. The chief relents and tells Aishe to be careful on her journey. Aishe is given the Torban of Truth to find the Legendary Torban Player.

Aishe then leads the party to the cliff again and finds a grave that reads Here lies the Holy Dancer and the Holy Guardian. She digs up the grave and finds the Sword of the Roamers. She explains that this is the sword that Roamer Guardians use to protect the tribe. The chief didn't approve of her having it so she buried it. She then lies under the stars and invites the party to do the same.

Night passes and they wake up the next morning. Aishe formally joins the party and they set off to find the Legendary Torban player.

If the player heads to Estard first and enter the Castle, Aishe will tell the party that she feels as though she has been before even though she knows she hasn't. If the party talks to King Donald, he will ask Aishe to look her in the eyes and ask if she recognizes him. Aishe will respond that she doesn't.

The party heads to Hubble and finds it a place dedicated to to the arts. They meet Queen Euphonia and tell her of their quest to find the Legendary Torban Player. Euphonia responds that she will use her influence to organize a contest so that a Torban Player can be found. Aishe leaves the Torban of Truth with the queen and continue on their adventure.

After completing the "Memories of an Old Friend" DLC tablet, the truth is revealed to King Donald that Aishe is in fact the descendant of Prince Kiefer and Lala, when the ring belonging to Kiefer's mother suddenly appears on Aishe's finger. The king warmly accepts the young woman who is his descendant and tells her that she will always have a place in Estard if she so chooses.

Aishe is able to equip most weapons and armours in the game. Because of this and her high strength increases, she is best suited to physical attacks.

Being the ritual Dancer of the Roamer tribe, it isn't surprising that Aishe joins the party with the Dancer class already mastered. She joins the party as a three-star Warrior. The player should allow Aishe to become a five-star Warrior so that she can use the skill Sword Dance, a powerful skill that attacks all enemies four times. This does not, however, apply to the remake, as other vocations may also have Sword Dance in their repertoires.

Because she has already mastered the Dancer class, it would be a good idea to learn the Luminary class after mastering both the Troubadour and Jester classes.

She appears as part of the Dragon Quest VII story event. 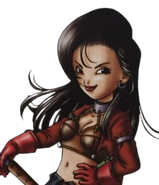 Aishe as she appears in Dragon Quest of the Stars