Although Alefgard is a set of continents divided by water, generally the divisions are quite small, requiring only bridges to connect the various land masses. The exception to this is the southeastern continent, which can be reached only via the Swamp Cave. Rather than identifying areas by geographical location, it is easiest to identify regions by the names of towns/villages in the vicinity (i.e. the Kol region).

Alefgard serves as the only geographical setting. It contains every component of the game and must be fully explored in order to reach Charlock Castle and defeat the Dragonlord.

Alefgard has been severely minimized in favor of the larger world map for II. Almost all of the Alefgard locations have been removed with the exception of Tantegel, Charlock Castle, and the Southern Shrine. Overall, Alefgard plays no significant role in II.

Alefgard is the 'underworld' or 'dark world' and is reached late in the game. This game features a full Alefgard, including some locations which did not appear in the original Dragon Quest such as the Tower of Kol. At the end of III, Alefgard is sealed off from the overworld.

Dragon Quest Builders takes place in Alefgard, following an alternate series of events from the first game where the Hero agrees to the Dragonlord's offer to rule half of the world. The Dragonlord and the monsters ravage the land, destroying civilisation while the people are robbed of the ability to create and rebuild.

Alefgard has its own specific world music which is used consistently in the first three Dragon Quest games. This musical theme is arguably the most well known in the series. 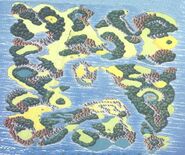 Overworld artwork map
Add a photo to this gallery

Retrieved from "https://dragonquest.fandom.com/wiki/Alefgard?oldid=178313"
Community content is available under CC-BY-SA unless otherwise noted.