Amos is a hidden playable character from Dragon Quest VI. It is optional to recruit him depending on whether you tell him he's a monster or not. If you do not tell him and give him the seeds of reason afterwards, he will join your party. If you choose to tell him he's a monster, then retrieve the seeds of reason and come back, Amos will be gone and you will never get the option to recruit him again unless you restart your entire adventure or save in the church before talking to him.

His personality makes him a true hero, as the people in Scrimsley love him for not chasing after fame and glory when trouble appears at their doorsteps. He just can't stand to see his friends in danger.

A local hero in the community of Scrimsley, Amos was fighting a monster when he was inexplicably bitten in the backside by it, turning him into the Scrimsley terror by the light of a full moon. The townsfolk are frightened whenever this transformation takes place, but few are aware that the monster is actually Amos as a werebeast. The Hero and his party arrive when the townsfolk struggle to figure out a way to deal with their "problem". The party stays the night and bears witness to Amos' gruesome condition, the monster squaring off with them and being defeated.

Having discovered the town's "dirty little secret" for themselves, the party is urged never to tell Amos of his episodes, as the townspeople still have immense respect for him. Some do not even seem to mind Amos' condition despite their fear of monsters in general. They tell the party that some seeds of reason, grown on a nearby peak, might help him manage his condition. Traveling north, the party ascends the peak to find a smarty plant and some seeds nearby. They return to Scrimsley with the seeds and give them to Amos. He eats the seeds, which cause a bizarre reaction that results in another metamorphosis; but this time, Amos' human mind surfaces, allowing him to control the beast at will. He joins the party at the Hero's request, and the party's quest is free to resume.

In battle, Amos is comparable to Carver in terms of stats, but his defense and resilience make him stand out a bit more. As with the cutscenes he's involved in at Scrimsley, Amos has a unique ability called Megamorphosis. This zero mp cost spell transforms Amos into the Scrimsley Terror, and attacks a random enemy or all enemies at the cost of his turns. He is also able to use the Heal spell, making him a Paladin or basic Warrior of sorts. 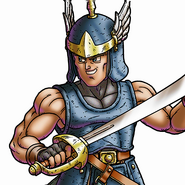 Amos, as seen in Dragon Quest of the Stars
Add a photo to this gallery

Amos was a Jewish prophet; his prophecies are recorded in the Book of Amos.

Retrieved from "https://dragonquest.fandom.com/wiki/Amos?oldid=210950"
Community content is available under CC-BY-SA unless otherwise noted.