Angel Falls is a town in Dragon Quest IX. It is the first town visited in the game. It is also the town that the Hero/Heroine is selected to protect as guardian.

After a short animation, the Hero/Heroine stares at the Guardian Statue. Then Ivor comes to them to teach them the "Village Rules", but really he is making fun of them. Then Erinn comes and sends him off and tells them to take a walk, and when they are ready, she invites them tocome home. The Hero/Heroine goes to Ivor's house to see him being scolded by his father, the mayor. The Hero/Heroine heads back and rests.

The next day, Erinn wakes the Hero/Heroine up to say Ivor is there to see them. The Hero/Heroine goes and meets Ivor, who takes him/her outside to the side of the house. He explains how a landslide came between the path of Angel Falls and another town called Stornway. He says he will clean it but he wants the Hero/Heroine's help. If they say no, he guilts them by saying they owe Erinn a debt for her kindness.

When they head to the exit of the village, Hugo stops them, but Ivor pushes him aside. The two head out and reach the pass. When they reach, there are 3 paths. On the straight one they see the Starflight Express. Ivor cannot see it and says it's just a fallen tree. On the right side there's a pond with a treasure chest. Open it and find a Gold Ring. On the left the continuing path with the landslide, the Hero/Heroine and Ivor can't clear it, but you hear voices from the other side. They are Stornway soldiers, saying that they will have the landslide cleared. Then they mention a woman named Patty, who came through the Hexagon.

When they head back to Ivor's house. His dad was very worried about him, and scolds him as usual. Then Erinn swooshes into the room to see if the Hero/Heroine had really been out of the village, and takes them back. Then, after, they go back to Ivor's house, Ivor thinks he's a hero.

Erinn hears about Patty and asks the Hero/Heroine to see if she's fine. But then she changes her mind. The next day the hero heads out to the Hexagon and keeps going straight when in. There is a stone wall blocking and a ghost comes, as if guiding the hero. The ghost then leads them to a statue with a button behind it. When pressed, the wall moves. When the Hero/Heroine makes it to the end of this first dungeon, they see a woman trapped under a pile of rocks. She says she was crushed when running from a beast. When the Hero/Heroine helps her, it comes back. Then they defeat the Hexagoon.

The Hero goes back to Angel Falls with Patty and head into the Inn. There, Patty reveals that she has come for the Inncredible Inntertainer (Inny). When found that the innkeeper is dead, she sees a future in innkeeping for Erinn. Erinn refuses, seeing that there is no one to care for this inn. That night, when the hero goes to Erinn's house to call it a day, they see a ghost, the same one at the Hexagoon. Then while they talk, a blue ball of light comes and takes form of a faerie. She reveals herself as Stella, captain of the Starflight. She wants the Hero to prove that they are a Celestrian by sending the ghost's spirit to the heavens. The Hero goes to a bush next to the waterfall to obtain the Inny, give it to Erinn, and she sees it was her father's. When the Hero/Heroine comes out, there is the ghost (Edwinn) fading, going to the heavens. Stella tells you to pick up the benevolessence, but it's invisible.

The next day Erinn decides to leave for Stornway to run the inn there and leaves Ivor in charge of the one in Angel Falls. Then Stella tells the Hero to go back to the pass to see if the Starflight will work now. They go, yet it doesn't work. Then she suggests they should travel to Stornway and see if things get better from there, thus ending the Angel Falls story line.

The Town Inn when it was under Erinn was a popular resting place for travelers, however when Ivor took over the Inn lost some of its reputation.The waterfall for which the town is named is said to having healing properties This is the reason given for why Erinn and her father moved there when she was a child and is later used in a few quests to produce Angel Tears when combined with fresh water.

At the east side of the region is the dungeon The Hexagon, the original connection path between Angel Falls and Stornway.

In the start of the game, Erinn will give the Hero/Heroine free rest at her house. Later, Ivor takes over the Inn after she leaves for Stornway. 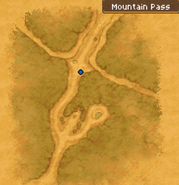 The Hexagon.
Add a photo to this gallery

Retrieved from "https://dragonquest.fandom.com/wiki/Angel_Falls?oldid=203800"
Community content is available under CC-BY-SA unless otherwise noted.