Aquila is a character in Dragon Quest IX. He is the Hero's mentor at the beginning of the game. He plays a pivotal role in the overall plot of the story. Aquila is the apprentice of Corvus.

Aquila is a tall, well built Celestrian with hard brown eyes.  His expression is firm and strict to match his personality.  He does not have hair but has thick brown eyebrows.  Like all Celestrians a halo hovers above his head, and he has wings approximently 3/4 of his height (when folded they go from his shoulders to his ankles).

His sleeveless shawl has a strap across his muscular chest with fringes hanging to his waist.  From his middrift to his shins is a skirt cover which halfway down is just the thick fringes matching other Celestrian attire.  Also on his cover is a fringe going straight down the middle to mid thigh.  His outfit consists of pale blues, oranges, and yellows (and some green dots).  Under his shawl and skirt cover Aquila wears black pants and tank top.  He also has black arm warmers from his elbow to his writst.  His tan and yellow layered boots go half way up his calf.

Aquila is strict and stern, serious about his mentoring and his duty as a Celestrian.  He always does what he believes best. He is careful in what he says and does, his praises rare but full of truth.  He also comes off mysterious and hiding something, though that could just be because he is Heros mentor and doesnt need to explain himself to anyone but Apus Major.

He holds Apus Major with upmost respect, as the other Celestrians do.  Each return trip to the Observatory the first thing he does is report in with the Celestrian leader.

He is also close friends with Columba, the librarian.

Aquila is Hero's mentor.  The game opens with him teaching Hero about the responsibilities and history of the Celestrians, Telling them "You have come far, [Hero's Name].  I must confess to having my doubts when you became the Guardian of the village in my stead.  But its inhabitants' continued peace and saftey is proof of your devotion."  After returning to the Observatory after collecting a Benevolessence he sends Hero to speak with Apus Major while he deals with his own matters.  He is there when Hero offeres the Benevolessence to the Great World Tree, and again the second time, causing a cut scene.  He attempts to catch Hero.

After the hero returns to the Observatory for the first time, Apus Major tells the hero that Aquila went down with other Celestrians to find the Fyggs and the hero. Aquila's whereabouts are still unknown until he appears along with Barbarus to attack the Starflight Express. He takes the seven Fyggs which the hero has been collecting and hits the hero to knock him/her out of the train. However, Aquila then takes the Fyggs to Apus Major himself.

Later, Aquila appears before King Godwyn and reveals that he has been working undercover against the Gittish Empire. Aquila attacks the king, but his attack proves useless. King Godwyn then nearly kills Aquila, prior to engaging in battle with the hero. If the hero speaks to him after the attack and before engaging King Godwyn, he says "Is this an... apparition? [Hero's name], can it truly be you...? What brings you... to this accursed place...?" Afterwards, when the king is defeated, the hero and Aquila chat, and then Aquila notices the King about to attack the hero, and sacrifices himself. He kills the king and begs the hero to save Corvus and the other Celestrians before dying of his injuries.

In Quest 163, "When a Star Wishes Upon You", the hero is asked by Pavo to get a prayer pearl. Once he/she gets the prayer pearl, they need to go up the Realm of the Almighty where he/she can talk to Celestria. There, Celestria sends the hero to the "Realm of Memory" where they can give the prayer pearl to a Celestrian and change their destiny. When they are sent there, the hero sees Aquila and Corvus talking. Aquila is shown to be puzzled about why Corvus is fond of the mortals, even though the Almighty doesn't like them because of their evil. Corvus responds saying he has faith in the mortals, and that it is up to Aquila to decide what he believes in, and leaves, which is the last time Corvus and Aquila talk. After this scene, the hero talks to Aquila, who is surprised that a mortal is able to come to the Observatory (he ends up thinking the hero is a dream or a illusion). This is when the hero/heroine gives him the prayer pearl. Even though Aquila doesn't believe what the hero says about the prayer pearl's abilities, he takes it. After he takes it, he starts talking about how hard it is to have Corvus as a master because of their opposite beliefs. He then states that if he ever does have a pupil, he will teach him/her the ways of the Observatory first, before anything else. Once he says this, the hero is transported back to the present where he/she sees what has changed. The hero then goes to Angel Falls and goes to the Guardian statue where he/she sees Aquila as a human like the hero. He explains that when battling King Godwyn and they stabbed each other, he remembered the prayer pearl and prayed that he wouldn't bring any more sadness upon the people closest to him. The prayer pearl ended up saving his life so he was able to defeat King Godwyn and at the same time, stay alive. He mentions that once the hero defeats Corvus and the other Celestrians become stars, he was told by Celestria that, due to his sins, he will live the rest of his life as a mortal. While living as a mortal, he says he understands why his teacher was devoted to mortals and he knows that the strange traveler he met that gave him the pearl was the hero. He thus ends up becoming part of the hero's team. Once the hero reports to Pavo, it turns out that Pavo and Aquila are actually twins, but they are both opposites because of their beliefs. Pavo then says that the hero can rely on both her and her brother for assistance, though she doesn't join your team like Aquila.

After the game and after Quest 163 "When A Star Wishes Upon You", he becomes available as a party member. He will be a level 60 Warrior with 148 skill points to allocate.

Cutscene at beginning of game, over Angel Falls 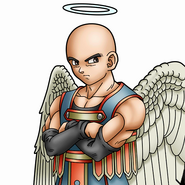 From DQS
Add a photo to this gallery

Retrieved from "https://dragonquest.fandom.com/wiki/Aquila?oldid=205363"
Community content is available under CC-BY-SA unless otherwise noted.