Atlas is a recurring boss monster in the Dragon Quest series.

Atlas is a hulking orange cyclops with a horn on his head, an oaken club in his hand, and a blue toga wrapped around his chest and waist.

Much like the ancient Titan he was named after, Atlas is all at once imposing, strong, and slow to act. A properly equipped party will find him mostly inaccurate insofar as hitting his intended target, but he also tends to land critical hits more than most other monsters, making him a priority to defeat as quickly as possible.

Atlas is a heavy-hitting orange cyclops who resides in fairly high levelled grottoes. In this game from his speech before the battle is hinted that he is one of the ten monsters that were created by Zenus' remains (due to Corvus' attack): in fact he says "WHY YOU TURN INTO TREE!?", probably referring to Celestria's transformation into a tree.

Atlas strikes twice per turn, and has enormous attack. His only skill is Crackerwhack, an attack skill that hits the entire party at once. He does not know disruptive wave, so kabuff is highly recommended. The Paladin coup de grace, Knight Watch, is also useful, as this can tie him up for several turns.

You'll want to have at least one Sage with you, and a Paladin. Your Sage should cast Twocous Pocus on the first turn if it can, if not then just go straight to Kabuff. Afterwards, you'll want to apply Funereal Fource and Gritty Ditty to your party. As Atlas doesn't Disruptive Wave, you won't have to constantly renew your Kabuff, so if you have access to it and you're not constantly healing your party, try to use Channel Anger and then use Kazam or Kazammle on him for damage support. With or without Twocous Pocus, this will do a decent amount of damage.

Atlas is the ultimate antagonist of chapter 3. He holds dominion of the island of Moonbrooke and is the top authority of the portion of the Children of Hargon on the island. He enjoys toying with the Builder and the people of Moonbrooke by waiting for them to become hopeful-by rebuilding Moonbrooke castle-before attacking. He is defeated by a massive canon built by the Builder with the help of the King of Moonbrooke.

Additionally, a shadow fiend manifestation of Atlas appears in Hargon's Castle, reflecting his appearance in Dragon Quest II in the same location. Though he simply dissipates without putting up much of a fight. Of Hargon's top three, Atlas is the only one to appear in the story proper, Belial's and Pazuzu's shadow fiend vestiges are their only appearances in Dragon Quest Builders 2. 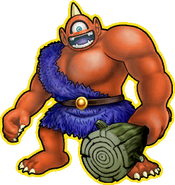 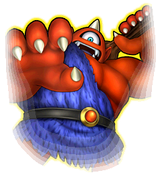 Retrieved from "https://dragonquest.fandom.com/wiki/Atlas?oldid=182998"
Community content is available under CC-BY-SA unless otherwise noted.