Aurora (Meer in Japanese), along with Luceus, is one of two main characters in Dragon Quest Heroes: The World Tree's Woe and the Blight Below. She is the Captain of the Royal Guard of Arba.

Aurora is loyal to her town, the Royal Guard, and King Doric, often fighting alongside Luceus to protect the kingdom. However, she’s also impatient, blindly rushes into battle, and often ignores Luceus’ plans and strategies during situations. However, she also has a kinder side, as shown when she mourns the loss of her partner, and rushed in to help Terry when three robots were summoned. She often worries for her good friend, Healix, and was relieved to find out he didn’t turn evil with the other monsters. Aurora also was impressed, and amused, when Alena rushed in to save them from a rock projected by a Gigantes. She was also embarrassed by Nera Briscoletti when she complimented her and Luceus' relationship, stating that she and Luceus were just friends.

The World Tree's Woe and the Blight Below

During the festival, Luceus, Aurora, and Healix were at a shooting gallery. Aurora, after seeing Luceus knock over a toy on the shelf with ease, she tried to do the same with “two” guns, only to miss all of the toys. She was amazed when a trio of Chimaeras flew for the airshow. The festival came to a sudden end when a volcano from across the sea erupted, spewing black smoke that blocked the sunlight in Arba, causing all the Monsters, sans Healix, to Attack the humans. When the castle was under attack, she and Lucius aided Doric and the guards in ridding the palace from the attacking monsters. Even with the arrival of a Dragon, they were successful. When Luceus felt that worst wasn’t over, he suggested in heading to Calibur to seek assistance and help out the people there.

Twin Kings and the Prophecy's End

Aurora can be played in co-op dungeons, but cannot be played in the regular story mode. Having save data from the previous title grants Aurora costumes for this game's female protagonists. 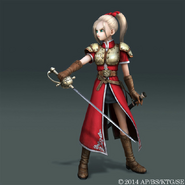 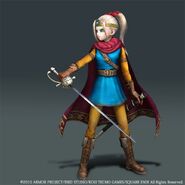 Aurora's third artwork in the Heroine of III costume.

Artwork of the Luceus and Aurora battling Cyclops and other monsters.
Add a photo to this gallery
Retrieved from "https://dragonquest.fandom.com/wiki/Aurora?oldid=143957"
Community content is available under CC-BY-SA unless otherwise noted.