A female, pink Professaurus-like monster, she speaks with a heavy lisp. She is greedy, taking people's prized possessions and gets some sadistic pleasure out of their pain and suffering.

Released after the Fall, the dragon tormented the people of Phnom Nonh into giving up their most valuable possessions, including family and friends, and took them to a grotto at the south end of the Champs Sauvage, where she hoarded her ill-gotten gains. When the Luminary arrives en route to Phnom Nonh, his party and Sylvando's troupe meet a man named Da, whose boy Son has gone missing. The group makes for the cave and meets Son on the way, who is trying to recover his mother’s necklace that Da offered in tribute. Avarith is poised to take the Luminary and his party hostage when they have nothing to offer, but Sylv intervenes to negotiate for the captives' release, promising something far more valuable in return. Sylv uses his sleight of hand to place a Horse manure in the creature's claw; and when his offering is revealed, she turns on the party and attacks them. Despite her best efforts by Fizzling the party's spells before the fight, she is defeated and her ill-gotten gains are liberated by the Luminary and his party.

Pun on "avarice" and either Lilith or Marilith, both of which are recurring monsters in the Square Enix universe. Avarice refers to extreme stinginess or greed, which this Mordegon follower exhibits.

"Avarith” is also "avarice" as said with a lisp. 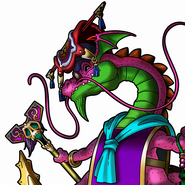 Avarith, as seen in Dragon Quest of the Stars
Add a photo to this gallery

Retrieved from "https://dragonquest.fandom.com/wiki/Avarith?oldid=195598"
Community content is available under CC-BY-SA unless otherwise noted.