I command a power greater than you [Greygnarl] have ever known.
— Barbarus during his fight with Greygnarl in Upover

Barbarus is a large black dragon that is allied with the Gittish Empire in Dragon Quest IX, and is Greygnarl's look-alike brother and mortal enemy, as well as the true secondary antagonist of the game.

Barbarus is a large black dragon monster with wavy green hair that can be seen on almost the entirety of its body and tail.

He, along with the rest of the Empire, was defeated over 300 years ago by Greygnarl, and, also like the rest of the Empire, was brought back with more power and attempted to obliterate Upover, but Greygnarl stopped him by flying in front of the giant energy ball. Barbarus is also the dragon that attacks you on the Starflight Express with Hootingham-Gore on his back. It is revealed when you check Greygnarl's spot in the Defeated Monsters List after you defeat Greygnarl in his grotto that he and Barbarus are brothers.

Unbeknownst to the world, Corvus would revive Barbarus along with the Gittish Empire, determined to destroy humanity and the Celestrians. Unlike others in the Empire like the Triumgorate and King Godwyn, Barbarus seems to have been fully aware that he had been brought back from the dead by Corvus, based on a comment to Greynarl. He first appears after the Hero is defeated by Aquila due to the Celestrain rule of not acting above their superiors shooting down the Starflight Express on Hootingham-Gore's orders as a demonstration of "How fired up" he is against Greygnarl. Later, after the Hero survives, meets Greygnarl, and has worn the Dragon Warrior armour set, Barbarus shows up after his mortal enemy got rid of Chimaeras pursuing him and the two fight. After a light fireball is presumed to have killed him, Barbarus's eyes turn purple and reveals the fight won't end like it did 300 years ago, saying he commands a power greater than the old dragon has ever known, blasting him with dark blasts and charging up a sphere of darkness that forces Greygnarl to sacrifice himself to save Upover and the Hero to fall and be captured in the Gortress. After the prison's warden Goreham-Hogg is defeated, Barbarus tries to prevent the Hero, Sterling, and the Gortress Guerrillas from leaving while killing the Gittish officer who was knocked out by Sterling's right jaw, but is blindsided by the Starflight Express's appearance from the whistle and is forced to retreat. When King Godwyn is defeated and Aquila ascends into heaven, Corvus is freed from his shackles and defeats the Hero since the Celestrain rule forbids them of acting above their superiors and reunites with Barbarus, making the Realm of the Almighty a "fitting home" for the both of them before they obliterate the mortals. When Corvus is defeated the first time after the Hero consumed a Fygg to become mortal to get around the Celestrain rule of not acting above their superiors and retreats to the middle of the Realm while resting in a red cocoon, he commands Barbarus to fight the Hero for disturbing his slumber to which the dark dragon does. Despite a harrowing fight, Barbarus is defeated, allowing the Hero to avenge Greygnarl.

Barbarus has a physical attack, a stronger variant (Slash with claws), War Cry, Kazam, Dark Breath and Wave of Panic, which lowers defence and agility.

He is weak to Light, so Life Fource should be used if available, and your sword-wielders should attack with Dragon Slash while your Priest or Sage keeps everyone healed. 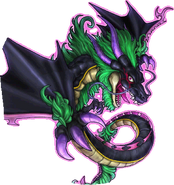 A cutscene of Barbarus in IX.
Add a photo to this gallery

Retrieved from "https://dragonquest.fandom.com/wiki/Barbarus?oldid=208593"
Community content is available under CC-BY-SA unless otherwise noted.