Bianca Whitaker is a character and possible party member in Dragon Quest V. She is the Hero's childhood friend and the daughter of an innkeeper.

As a child, Bianca was short, had long pigtails and wore a green cape with a long orange dress and wore jewellery like earrings and bracelets. As an adult, she wears an orange cloak with a green dress, she keeps her hair tied to a braid which hangs on the right side of her head. She is often sought after for her beauty as well, which is commented by both the men in Stockenbarrel and Mostroferrato.

Bianca is a very outspoken, adventurous and even a bit of a romantic. She greatly enjoys being outdoors and travelling in search of adventures, she is also a bit tomboyish and describes herself as "being a bit rough around the edges". During the ten years the Hero is taken away into slavery, Bianca and her family went through hard times and she was then forced to take care of her father, but she kept the dream that someday she would go on an adventure again.

This time serves to harden Bianca a bit as she seems to miss her mother dearly, but nonetheless works hard everyday, returning home only at night so that she can provide for her father. This goes to show that despite being a dreamer, Bianca is also very reliable and responsible, which is commented on by the people in the village of Stockenbarrel.

As a wife, Bianca keeps much of her personality and remains supportive to the Hero's wishes of continuing his quest. She is overjoyed that she gets to travel with the Hero once again and confesses to have always loved him. Married life however does little to stop her adventurous side (if not just bring it out more as now she is reunited with someone she cares and can share adventures with him). She is also very playful and cheerful, sometimes even getting into small competitions with the Hero. She still shows the Hero a lot of affection, often proclaiming that she will never leave his side.

As a mother, she is very close to her children as well as loving towards them. While worrying for her children, she still does enjoy the idea that they can all travel together as a family and embraces it fully, if not only for the fact that that way, she can make sure no one harms them.

The Hero and his Father first meet Bianca as a child in Whealbrook. It is revealed that she and the Hero have met before and that when he was smaller, she would take care of him and play with him. She and her mother are in town getting medicine for her father, but it seems that the man her mother sent to get the medicine has yet to return, the Hero then goes off to rescue the man despite being only six years old. After the herb-maker is found and the medicine is made and delivered, Pankraz escorts Bianca and her mother back to their home in Roundbeck, accompanied by the young Hero.

Pankraz is thinking of returning, but agrees to stay the night and catches a cold passed to him by Bianca's father, Whitey, and the party is unable to leave. While wandering around town with the hero, they meet two kids who are bullying a sabrecub. After some discussion, they agree to give up the cat if they can defeat the ghosts at Uptaten Towers. This quest is successful in the end and they are able to put the spirits in the tower to rest, for their efforts they are rewarded with a golden orb that, unbeknownst to them, would become more important than they could ever imagine. When the duo returns to the town, word spreads of their adventure and as such, the bullies are forced to hand over the cub. She names the cat, then confesses her parents would not let her keep it. She entrusts the cub to the Hero, then gives the cub a ribbon as a memento.

Between the first and second generations, Pankraz was killed saving his son and the latter was sent off into slavery for 10 years. Things were also not as good for Bianca, as her parents had to sell the inn they so dearly used to run and move to Whealbrook. After that, her mother passed away and she was then forced to become the provider, as her father, ever the sick man, doesn't have much time to live either (something he keeps hidden from Bianca).

Bianca is seen again in the second generation when the Hero is searching for the Circle of Water, when he visits her house, her father then dying, asks him if he would take care of Bianca when he passes away and confesses that she isn't actually his daughter and is in fact adopted. They then catch up talking about all that happened and while being somewhat shocked and dismayed from the news that he would marry soon, she decides to help him find the ring under the pretext that she was hoping all these years he'd come back to take her on an adventure once more like he promised when they were young. She then unlocks the gate keeping the Hero's ship at bay and helps him inside the cave, making their way trough monsters to find the ring.

Upon reaching the Briscoletti household and delivering the last ring to Mr. Briscoletti, the Hero is now to be tied to Nera, however the latter believes that Bianca has feelings for the Hero and (despite Bianca trying to assure Nera "it's not like that") wouldn't feel it would be right for her to steal the Hero from Bianca if he would only grow to hate her for splitting the two up.

If she is picked to be his bride, she confesses that she had in fact, always loved him and is overjoyed to finally be able to go off with him adventuring. The now married duo, then receive Mr. Briscoletti's blessing and he lets them use his ship, which they use to reach the queendom of Helmunaptra. There, Queen Cleohatra mentions that she knew the tale of Pankraz and that the Hero is actually the Prince of Gotha, so they set out to find his lost home. On the way, Bianca passes out in the town of Battenberg, but the incident is brushed off as her just being tired. However, this incident happens once more in Gotha and it is then revealed that Bianca was, in fact, pregnant. During that time where she is unable to join him, the Hero goes on a ritual of passage so that he can succeed to the throne of Gotha as tradition demands. Just as he arrives successfully from his quest, Bianca enter labor and is able to give birth to twins.

During the Hero's coronation however, Bianca is kidnapped, but before she is taken away, she is able to instruct the children's nanny to hide herself and the children. The Hero then sets out to save her regardless of the cost, but things take a turn for the worst when Ladja (the monster who killed Pankraz) appears and turns the couple into stone statues, in which they remain for 10 long years.

Later she shows up again in generation three, in which her statue is being kept in the temple the Hero was forced to build for 10 years in slavery. After the Hero and her children are able to defeat the temple's priest, they receive the Ring of Life and with it, they bring back Bianca who is able to move once again and is reunited with her children and husband after 10 years. The family is then ready to go into Nadiria to finally save the Hero's mother and defeat Grandmaster Nimzo.

If Bianca is not chosen as the Hero's bride, she returns to Stockenbarrel to be with her father, where the Hero can visit her in Generation Two and Three and during the ending. She doesn't marry, although she does seem to have willing suitors in the village.

Contrary to internet rumors, Bianca does not suffer a harsh fate in any version of the game if the Hero doesn't choose her for his wife. In all three versions (SNES/Famicon, PS2, and DS), Bianca and Whitey are alive and well throughout the remainder of the game. The rumors stated that Whitey would die of sadness and Bianca herself would become a mistreated barmaid.

Bianca appeared as one of the special guests at the Quester's Rest in Stornway. This could be obtained when the DQVC was available using Nintendo's Wi-Fi Channel. When spoken to, Bianca gave the player different pieces of her outfit for fulfilling certain conditions. The player would receive an Accolade "Best Friend Bride" after acquiring every piece of her outfit.

The Luminary can visit the Briscoletti mansion on the eve of the wedding via the Echo Chamber in the Nintendo Switch version of the game. Due to the actions of a monster sealed away by the Briscoletti ancestor Rodolfo, Bianca has been turned into an exact duplicate of Rodrigo on the eve of her wedding day. Thankfully, the groom is still away from the mansion and the monster has been located in Alltrades Abbey.

Bianca is very worried about how her father might handle her sudden transformation, fretting about how poor his health is already and that he doesn't need a major shock such as this. Once the transformation has been undone, she expresses her gratitude to the Luminary. She also mentions that he reminds her of the potential groom, and reminisces about their adventure in Uptaten towers.

Bianca also plays a role in the sabrecat incident at Chateau Felix, loaning her ribbon out to tame Saber once again. She will be happy to have been of help, and glad that her childhood pet has returned.

Bianca is one of the thirteen playable characters. She and Nera have been mysteriously transported to the land of Arba on the night before one of them is about to get married. In order to differentiate her from other playable characters, Bianca uses Bows as her weapon of choice in the game, and can cast both Frizz and Snooze in battle. Her Coup de Grâce is Ribbon of Memories, where she uses her ribbon to summon her trusty great sabrecat companion, here named Purrcy, who rushes out and strikes any enemies in front of her.

Bianca can be played in co-op dungeons, but cannot be used in the regular story mode.

She is a playable character in the game.

She is one of the three characters from Dragon Quest V featured in Dragon Quest & Final Fantasy in Itadaki Street Special.

Bianca is a feminine name of Italian origin, representing the colour white.

An injured Hero and Bianca 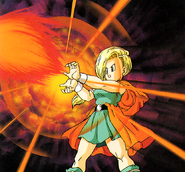 Bianca using a fire spell for the original V 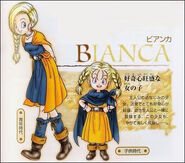 As she appears in Dragon Quest: Your Story 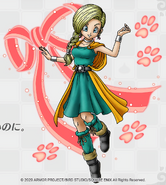 Bianca as a chibi in Dragon Quest of the Stars 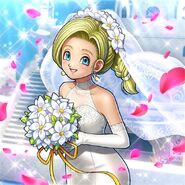 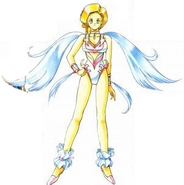 Bianca wearing the silk apron
Add a photo to this gallery 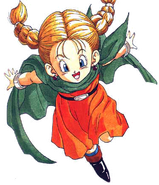 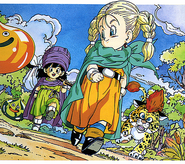 Retrieved from "https://dragonquest.fandom.com/wiki/Bianca?oldid=204365"
Community content is available under CC-BY-SA unless otherwise noted.