Bjørn the Behemoose is an ancient and horrifying demon from long ago who was sealed away by the Briscoletti family in ancient times due to his monstrous power. He is a major boss in Dragon Quest V, his defeat gifting the hero's party with the Ultimate Key if they can overpower the beast.

Bjørn is easily the size of a small mountain; even from a distance, his presence is overpowering. He also has large patches of moss/grass growing on parts of his body to emphasise just how ancient he really is. His fur is brown and he bears two large horns and wings as well. He also has three eyes. Occupying both screens in his DS incarnation, Bjørn is among the largest bosses to appear in the series.

Bjørn is a destructive beast that was sealed away long ago by the Briscoletti family. Little is known about his personality, but he holds an intense grudge against Rodolfo Briscoletti, the last one to seal him away before the game's events occurred. Even with few lines of dialogue, he speaks with a thick Nordic accent. Since he cannot locate Rodolfo, he resorts to crushing anyone else in his path, including our heroes.

Rodrigo Briscoletti requires your assistance with something early into the game, but it is not revealed until much later what you have done. He wishes for you to renew the seal on the beast that his family sealed away long ago. Much later, he asks for your help once again, the seal is weakening. Shortly after you arrive, Bjorn breaks the seal and arises from the sacred ground. He walks towards you, ignoring all around him, and once he gets close enough he engages you in combat, proving to be quite a powerful adversary.

A "Baby Behemoose" appears as one of the bosses in the game and it is incredibly large, though not as big as Bjorn from Dragon Quest V. However, after obtaining the Giant Scout Ring, the real Bjorn takes its place and is able to be scouted. Its size is 3, to fit its largeness from Dragon Quest V and its rank is B.

Bjorn remains a three space monster, but his rank has been increased, now being an A rank and a lot more dangerous, but other then that he is unchanged.

Bjorn is powerful monster that can be fought after the game is completed. During the main story, he is summoned by Velasco to destroy the Pillar of Light. He is an incredibly massive boss monster with an incredibly large sum of hit points. He walks towards the tower in quite the same way he did in Dragon Quest V, however now you must prevent him from reaching the tower via a cannon of some kind or all is lost. He has the ability to summon strange portals and uses lightning based attacks as well. He also throws large boulders and rockbombs at you from afar. 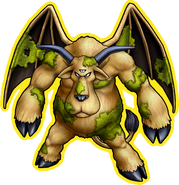 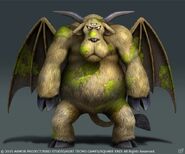 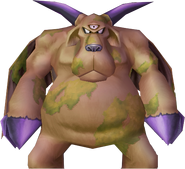 As seen in the trailer for Dragon Quest: Your Story

As he appears in Dragon Quest: Your Story
Add a photo to this gallery

Retrieved from "https://dragonquest.fandom.com/wiki/Bj%C3%B8rn_the_Behemoose?oldid=184781"
Community content is available under CC-BY-SA unless otherwise noted.