Blackmar is an antagonist who first appeared in Dragon Quest VI.

Blackmar is a large and bulky demon with a heavy resemblance to that of some kind of bulldog. He is mustard yellow with a rust colored red belly. He also bears rather large wings, filling his demon image.

Blackmar is a very cruel and devious member of Mortamor's army, fitting as he is the head of Gallows Moor. He is shown multiple times to have little to no concern for anyone but himself, including other monsters, apparently killing one who got on his bad side. He has a good deal of faith in Mortamor as well, like the vast majority of Mortamor's higher-ups.

Blackmar appears as the owner of a prison complex in Mortamor's dark world called Gallows Moor. Within the so-called "town", Blackmar regularly seems to execute people for crimes against monsterkind, such as disobeying the guards, and fighting Mortamor's minions. The party attempts to stop an execution on the guillotine, but are captured by Dogmus & Zozagel, and are forced to organize a prison break in order to escape by getting Dogmus and the other guards drunk. Blackmar does not drink due to performing a ritual where he intends to have one of his minions possess Sister Anne, forcing her to marry him using a cursed ring that will turn her evil, apparently as a way to break the prisoners further. When the party arrives, he insists to his minions that the prophecy isn't true, intending to showcase it by defeating the party himself. Blackmar does not drink and fights the party while sober, providing a very challenging boss battle as the first boss who always attacks twice on every turn. He fights alongside two Lethal Charmours, whom Blackmar can revive when they are defeated. If one of them dies, the other can summon a powerful Cureslime in its place which Blackmar will then be able to revive. This cureslime will entirely heal Blackmar as well, if it's allowed to. Upon Blackmar's death, he drops a silk tuxedo, presumably because of the "wedding" that was about to happen.

There is some debate about whether or not Blackmar is a Dread Fiend. Dhuran only references Murdaw, Jamirus, and Gracos besides himself, but this could simply be due to the fact that the party has not encountered Blackmar yet. While Blackmar does not have a seal placed on any dream world locations, this is most likely due to the fact that Blackmar is fought in the dark world. Like various locations are bound to the other Dread Fiends, though, all of Blackmar's guards are specifically bound to him, vanishing upon his death.

Blackmar also appears in Dragon Quest X as a boss in the story. He was possessing a young Dwarf and after the hero saves said dwarf, Blackmar reveals himself to the party engages them in battle. He is defeated and disappears. He can also be fought in the Magic Labyrinth, either by himself, or with Gracos, Jamirus, and Dhuran.

In Dragon Warrior Monsters, Blackmar (known as Akubar) is a minor boss. He is fought inside of a prison somewhat reminiscent of Gallows Moor, and attempts to lecture the player about the "horrible crimes" they have committed against monsters. Blackmar sentences the player to death and tells them to execute themselves on his guillotine, before having to fight them himself when the player fails to comply. 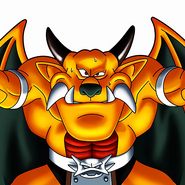 Blackmar, as seen in Dragon Quest of the Stars
Add a photo to this gallery

Retrieved from "https://dragonquest.fandom.com/wiki/Blackmar?oldid=194124"
Community content is available under CC-BY-SA unless otherwise noted.