The blue dragon is a monster who appears in the Dragon Quest series.

Blue Dragon appeared in the episode "Three Men & A Dragon" where he is only seen telling Dragonlord that Mega Man and Lana were coming to Charlock Castle, you can see he is wearing yellow clothing but when the curse was broken you can see he's not wearing the clothing but you see him with the clothing when he was one the dragon surrounding Dragonlord. The Blue Dragon, along with the Dragonlord, Slimes, and the Knight aberrant is the only Dragon Quest character to appear in the series. 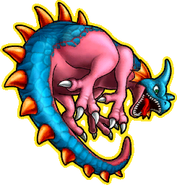 Blue dragon's second artwork for MBRV.
Add a photo to this gallery

Retrieved from "https://dragonquest.fandom.com/wiki/Blue_dragon?oldid=180663"
Community content is available under CC-BY-SA unless otherwise noted.