IV
Borya (ブライ, Burai in Japanese, Brey in the NES localization) is a character in Dragon Quest IV. He, along with Kiryl, is a retainer to Princess Alena, and follows her when she sets out on her journey to try and ensure her safety.

Borya is extremely old and wizened, hinting to his long history of the study of magic. He carries a staff everywhere, topped with a jewel that he presumably uses in some way for spellcasting, though it may be a mundane walking stick.

He is very loyal to Princess Alena, as evidenced by how he immediately rushes after her when she escapes the castle confines. He is deeply concerned for her future as the ruler of Zamoksva, and disapproves of her capricious attitude. He often laments what the young princess' late mother would say if she say her daughter acting so unbecomingly, and has spent some considerable time trying to encourage her to behave in a more traditionally appropriate fashion. Despite failing routinely at this, the old man is genuinely fond his charge and cares for her as a grandfather would. True to his age, he is a grumpy and cantankerous senior who will not hesitate to voice his complaints, ranging from the courting rituals of the younger generations to the idiosyncrasies of his fellow chosen. Despite his vitriolic tongue these personal criticisms are meant to help his companions improve themselves, showing that his grandfatherly nature is not limited to his tsarevna.

Chapter 2 begins with Alena begging her father, the King of Zamoksva, to let her explore the world, since strong fighters are needed more and more in their troubled times, with the Underworld creeping out of dormancy. However, he refuses, saying that with monsters showing increasing aggression, it's simply too dangerous to let her leave the safety of the castle. Alena goes back to her room but, within a few minutes, has been overcome with frustration and escapes the castle.

Kiryl and Borya, her retainers, give chase; they're resigned to not being able to make her stay put, but if she's going to leave, they can't allow her to travel alone. The three set out and soon come to a small village being terrorized by a local monster continually demanding young girls as a sacrifice. Alena immediately heads to the local church to offer herself as the next sacrifice, but she has no intention of dying; as soon as the demon shows its face, she, Kiryl and Borya spring into action and take it out, saving the village.

After journeying straight to the far ends of Zamoksva, the nomadic Desert Bazaar, she gets a summons from her father, who, upon receiving her, admits that he was mistaken in his over-protectiveness, and opens the Travel Gate to a nearby country. Here, Alena finds the local princess bemoaning her fate, because her father has promised her hand to the winner of the Endor Tournament, an annual fighting competition, and her father seriously regretting this promise. Though she hears rumblings of an extremely dangerous entrant named Psaro, Alena enters and gets to the finals, only to find that her opponent, who would have been Psaro, has disappeared. By winning the tournament, Alena absolve the Princess of her duty.

However, even as she is celebrating her victory a Zamoksva soldier rushes in and cries that she must return to the castle at once, then dies at the scene. The party returns to the Castle but finds it completely devoid of life. They set out to investigate and the chapter ends abruptly.

Alena and her companions are not seen again until Chapter 5, when Kiryl has fallen under a dangerous fever while in Mintos (which they traveled to from Porthtrunnel). Alena and a band of three mercenaries set out to the Feverfew root's reported location to try and recover some to cure Kiryl, but fails. However, the Hero succeeds, and upon learning of their destiny, the three immediately join the party for the remainder of the game. Some time later, they return to Zamoksva, finding the cause of its troubles to be the demon Baalzack, whom they kill in retribution and for the greater good.

Borya is found in the near-future version of Reaper's Peak, pacing back and forth around the village church. He is annoyed that Alena has given him the slip again, and notes that Kiryl has disappeared as well. Upon noticing the player, he introduces himself as the servant to the royalty of Zamoksva and asks if they have seen the Tsarevna. When told no, and that they haven' even heard of Zamoksva, Borya writes them off as being very strange to have not heard of his glorious motherland and tells them to keep an eye out for the Tsarevna.

Borya appears as one of the special guests at the Quester's Rest in Stornway. This could be obtained when the DQVC was available using Nintendo's Wi-Fi Channel. When spoken to, he gives the player different pieces of his outfit for fulfilling certain conditions.

As one can tell from a glance, Borya is a mage. He has high MP and Wisdom, but low physical attributes. Borya is one of the more popular characters in the game due to the powerful beneficial status effects he can infer on the party, as well as his ice-based offensive spells. However, the weapons and armour he can equip are quite limited, and he can only equip three shields.

In the NES version of the game, recruiting Borya can be delayed until Kiryl is cured. The Sony PlayStation and Nintendo DS version has a Thief's Key door placed in the Imperial Pantry of Parthenia, which Alena and her allies will only show up to open if Borya is recruited in the Hero's party.

Borya is the diminutive form of Boris, being a Slavic name most commonly used in Russian and the Ukraine. The name means "wolf" in Slavic languages, but was most likely chosen for sounding similar to "Bore ya", owing to the old man's habit of prattling on and on. 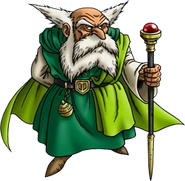