The boss troll is a monster who appears in the Dragon Quest series.

Great green goons that love to smack and smash anything and everything with their clobbering clubs. Goofily garbed in garish brown fluffy outfits, they're not to be underestimated in battle despite their foolish fashion sense. They often make deadly desperate attacks that can down an adventurer in a single bothersome blow. Sometimes, they'll attempt to shove a single enemy right out of battle and out of action.

A Boss troll is acting as the king of Manoza when the hero first arrives there. By using the Mirror of Ra, the hero is able to reveal the imposter and fight the boss troll. 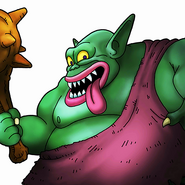 Boss troll, as seen in Dragon Quest of the Stars
Add a photo to this gallery

Retrieved from "https://dragonquest.fandom.com/wiki/Boss_troll?oldid=189181"
Community content is available under CC-BY-SA unless otherwise noted.