A bunicorn is a monster who appears in the Dragon Quest series.

Bunicorns are rabbits with a single horn. They have gray fur and the horn is often a yellowish brown shade.

Bunicons are not very tough monsters. Can be slightly dangerous in groups.

Bunicorns are Platiosi that the player can encounter in Forewood Forest, though only after progressing through the game enough to unlock the upper half of the area. They attack by charging straight with their horn, often slamming into walls and getting momentarily stuck before they can pull themselves free. 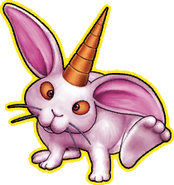 Bunicorn's artwork for MBRV.
Add a photo to this gallery

Bunicorn is a combination of the words bunny, a childish way of saying rabbit, and unicorn, a mythological horse bearing a single horn on its head.

Retrieved from "https://dragonquest.fandom.com/wiki/Bunicorn?oldid=184330"
Community content is available under CC-BY-SA unless otherwise noted.