The bunny suit is a special outfit in the Dragon Quest series. This charming costume is worn by bunny girls and it can only be worn by female characters. and is very lewd.

The bunny suit has a defense bonus of +17 and a style bonus of +38. It can only be equipped by Milly and Ashlynn. It can be purchased from Turnscote for 3,300 gold and sold for 2,475 gold. It can also be dropped by Splutterflies. If the bunny suit is worn with the bunny ears and fishnet stockings, it provides a massive style bonus of +30 for the Best Dressed Contest.

The bunny suit has a defense bonus of +17 and a style bonus of +38. It can only be equipped by Maribel and Aishe. Bunny suits can be purchased in El Ciclo after placing in the Style Ranking for 3,300 gold. Once again, the bunny suit has a massive style bonus of +50 if being ranked for the Style Ranking of the Excellence Grading Organization if it is worn with the bunny ears, fishnet stockings, as well as the silver platter.

The bunny suit has a defense bonus of +38. Only Jessica can wear it. If she wears this along with fishnet stockings and Bunny Ears equipped, her appearance changes. It can be made through in the Alchemy Pot by combining a bunny tail and a silk bustier. The suit can be sold for 1,775 gold.

The Bunny Suit is obtained as a reward for trading 13 mini medals from Cap'n Max Meddlin' at Dourbridge. 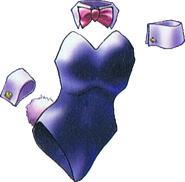 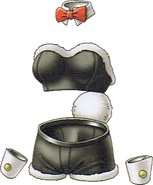 VIII 3DS artwork.
Add a photo to this gallery

Retrieved from "https://dragonquest.fandom.com/wiki/Bunny_suit?oldid=169632"
Community content is available under CC-BY-SA unless otherwise noted.