The ancient evil that once attempted to cover the world of Erdrea in darkness after defeating Yggdragon, the Dark One fought against the original Luminary, Erdwin, and his allies and was defeated. Unfortunately, just as Erdwin was about to deliver the final blow, he was betrayed and killed by his brainwashed partner, the mage Morcant, who proceeded to take Calasmos's power and become the demon sorcerer Mordegon.

Without the Luminary the Dark One could not be destroyed; so, as per Elder Eegoltap's suggestion, Serenica, Drustan and The Watchers sealed its body and sent it to the heavens. His prison, which resembled a glowing orb observable from land in all Erdrea, later became known as Erdwin's Lantern. Unbeknownst to anyone, his spirit had however survived in the form of a Darkling and he began wandering Erdrea biding his time until he could once again rise to power.

Throughout the game, he is usually seen as a black Tockle, and only seen by the Luminary. However, when reunited with his body, he has giant green armour, a face resembling an evil Watcher covered by a mask, and black aura.

Little is known of Calasmos' personality. He is depicted throughout the story as a being of extreme malevolence who will stop at nothing to bring about the total destruction of Erdrea and all life on it. While a spirit being, he was able to project his wrath through his hosts, drawing upon their darkest emotions so as to amplify them and use them toward his own ends.

As the story begins, Calasmos' spirit is first seen walking around Dundrasil as an ethereal being with a red glow. A lively atmosphere can be felt throughout the kingdom as it hails the arrival of a new heir to the throne. When the Luminary is born and a storm rolls in, however, he becomes solid black and watches his future enemy through a window and leaves before Mordegon and his army destroy the kingdom. He is mentioned several times throughout the game, but is not seen again until Gallopolis. He expresses amazement at the Luminary being able to see him and tries to reunite with his body sealed inside Erdwin's Lantern.

However, Mordegon (At this point the Lord of Shadows) destroys the prison stating Erdrea is his and his alone, declaring no other evil that is not part of his army should contest that claim. With his chance of revival blown, he could only watch in despair. After Mordegon is defeated and the Luminary decides to go back in time to prevent Veronica's sacrifice, he follows his nemesis to the day the World Tree fell by Mordegon's hand with help from Jasper. With his human ally defeated, Mordegon (Still possessing King Carnelian) kills him to silence his right hand man and throw him under the bus about the Darkspawn theory.

When he first tries to take the Sword of Light, however, Calasmos' Tockle arms slap him, causing the Lord of Shadows to suggest throwing a celebration at Heliodor, to which the Luminary and his allies agree to. After the party when everyone (Even the Cobblestone folk) is asleep, however, Mordegon once again tries to take the Sword, but Calasmos slaps him again, causing the party to catch him, but he teleports to the throne room. Once they reach the throne room, Mordegon leaves Carnelian's body and fights them, but is defeated. He realizes that the Luminary defied the flow of time to stop his victory, but warns him that Calasmos has done the same.

True to Mordegon's words, the Dark One leaves Heliodor and finally reunites with his body, breaking it out of Erdwin's Lantern. After his revival, any other monster that was part of Mordegon's army before and after the Fall go Malicious, while others finally make an appearance. Calasmos also revives Arachtagon, (Who brainwashes Underdigger, Abominable showman, Prima Donna, Whambelina, and Golden Boy into his service.) Jörmun, Gloomnivore, and the Auroral serpent, while allowing Bathysfear to start his reign of terror on the Mermaids. When the party cleans up the mess the Dark One caused, along with getting all the required items, they face the Dark One in a fight for the fate of Erdrea, and triumph.

With his dying breath, Calasmos warns them that light cannot exist without darkness, and blows up from so much light, ending him once and for all, with no betrayals from the Luminary's allies this time.

Calasmos at the start of the fight 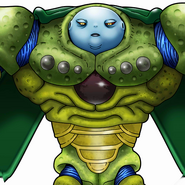 Calasmos, as seen in Dragon Quest of the Stars