Captain Crow in Memoriam resembles his original counterpart in that he wears a pirate hat, longcoat and baggy pants, has long hair and wields a sword in battle. He's all yellow in appearance and like the other Memoriam bosses had yellow highlights all over his body. 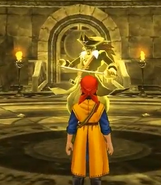 The Hero about to face off against Captain Crow in Memoriam.

Retrieved from "https://dragonquest.fandom.com/wiki/Captain_Crow_in_Memoriam?oldid=167955"
Community content is available under CC-BY-SA unless otherwise noted.