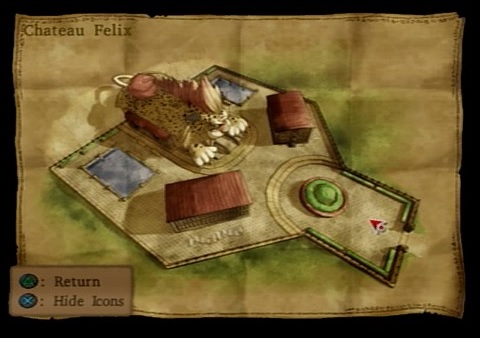 Chateau Felix is an area in Dragon Quest VIII. It's the home of Master Felix, who is fond of Great sabrecats, serving as a mix of a zoo and wild life preserve house for the beasts.

When the party first enters the compound, Tom the caretaker greets them. After asking three questions to assess the group's affinity for cats, Tom allows the party to speak with Master Felix. The diminutive zoologist explains that Chateau Felix is a part of the great sabrecat trust, a worldwide foundation meant to preserve the species from the influences of people and other monsters. Master Felix is currently bogged down with paper work, and he makes a request of the Hero--take a jug of sand and sprinkle it around a mysterious tree that only appears at dawn in the forest south of the chateau. Doing so will free the soul of Baumren, Felix's pet who had gotten lost on his way to the afterlife after passing away.

Baumren will speak to the party after being freed, thanking them and asking to tell Felix that he owes the man a life time of happiness before fading away. Reporting the events to Felix rewards the group with Baumren's bell, giving the Hero the ability to summon a Great sabrecat for high-speed transportation in nearly every area of the world.

The chateau is the first location the Luminary can visit through the altar of the cursed king in the Echo Chamber. At first, the party will only find Tom sweeping the grounds while the master is out, but after completing the events of the Briscoletti mansion, the first scenario will begin. Tom is being stared down by an angry sabrecat--Saber himself, who had gotten lost after the Mount Magmageddon expedition.

Tom is confused at the beast's aggression as he can normally tame any sabrecat, and fears Saber will send the other cats running away out of fear if he isn't calmed down soon. Begging the party for help, he asks if they know of something, anything to pacify the puss before it's too late. Tom mentions he can understand the growls of a sabrecat well enough, and explains that he heard Saber grumble about a Bianca before slinking off. That's the player's clue to return to the Briscoletti mansion and get Bianca's ribbon--the bride to-be has been worried about the big cat since he got lost, and loans her ribbon out immediately. Tom uses the ribbon on Saber, the scent sparking his memories of his master and Bianca once more, and he runs off to rejoin them. Tom is grateful for the party helping a cat in need, and rewards them with a pair of Beast claws for their trouble. Completing this scenario grants the password for the chateau at dusk.

The second scenario involves the Albert family--Rosalind and her maid have traveled to the chateau to find Jessica, who had been hit with a sudden burst of home-sickness that left her sobbing. The mage was near the chateau and Tom let her spend the night before sending word to Alexandria to alert her mother. When Rosalind arrived, she found her daughter transformed into a dainty young lady instead of the brash hothead she knew. Wanting her stubborn-to-a-fault daughter back, Rosalind asks the party if they can keep an eye out for personality changing books that may restore Jessica to her old self and promises to reward them handsomely if they can help. The salesman who first mentioned the books to Rosalind also brought up the country of Aliahan, and the widow suggests starting there.

There are three books that can be used on Jessica are found in bookshelves that have a blue stack on the top shelf, and each one yields drastic results. The first is the Champion's Code that is found in Ortega's house in Aliahan, which turns her into a paragon with Yangus' syntax and leaves Rosalind speechless and mortified. Next is Guns 'n' Buns that is found in the Briscoletti mansion, which turns Jessica into a bunny girl and leaves Rosalind furious at her sultry attitude. The final book is the Girl's Own Annual, found in the Quester's Rest. This book returns Jessica to normal, and leaves Rosalind wondering how her daughter became so pig-headed before chuckling to herself and thanking the party for restoring Jessica. The reward is a Goddess whip.

Retrieved from "https://dragonquest.fandom.com/wiki/Chateau_Felix?oldid=169024"
Community content is available under CC-BY-SA unless otherwise noted.