The cloak of evasion, also known as the clothes hiding and evade cloak, is a recurring piece of clothing in the Dragon Quest series. This garb increases the frequency of evading attacks from the usual 1⁄64 (~1.56%) to 1⁄8 (12.5%) (see below for exceptions.)

The cloak of evasion is a long-sleeved, green tunic with light blue trim which reaches down to the wearer's ankles and includes a hood. The shade of green varies in each game, ranging from light green to dark forest green. There is a jewel (blue in earlier games, red in later) in the front and runes sewn into the fabric, which aid in evasiveness. To complete the look, a light blue sash is tied around the waist. The cloak is often a mid-ranking clothing designed for spellcasters and other characters who cannot wear heavier armor.

The cloak of evasion can be purchased in Rippleport, Tantegel, and Dirkandor. It boosts evasion by 20% in all versions.

Capable of being equipped by all vocations, the cloak of evasion (called the evade cloak in the GBC Version) provides +20 defence and +20% evasion in the NES Version, and +23 defence and +12.5 evasion in all subsequent versions. It can be purchased in Norvik for 2,900 gold and sold for 2,175.

The cloak of evasion has a defence bonus of +28. It can be equipped by Bianca, Nera, the Hero's daughter, and several monster companions.

The cloak of evasion has a defence bonus of +28, a style bonus of +11, and may be equipped by Milly, Ashlynn, Nevan, and the slime recruits. Its evasion bonus has been given a slight boost to 16.6% 1⁄6.

The cloak of evasion has a defence bonus of +28, a style bonus of +11, and 16.6% evasion. It can be worn by Maribel, Ruff, and Sir Mervyn. If worn with an agility ring, it grants a +20 bonus to style if worn when ranked by the Excellence Grading Organization for Style. It can be purchased at Pilgrim's Perdition, the Alltrades Arena, Alltrades Abbey, and El Ciclo for 3,000 gold and sold for 1,500. Cloaks of evasion can also be won as prizes from the Lucky Panel at the Casino.

The cloak of evasion has a defense bonus of +29. It can be worn by Jessica, Angelo, Morrie, and Red. The cloak of evasion can be purchased on the Holy Isle of Neos, from the traveling merchant near Argonia, and Arcadia for 3,000 gold and sold for 1,500 gold. Red joins the party with it equipped. It can be combined with boxer shorts in the Alchemy Pot to make a robe of serenity.

Comes with a top portion and a bottom portion. 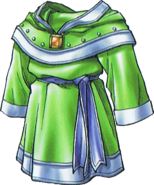 Retrieved from "https://dragonquest.fandom.com/wiki/Cloak_of_evasion?oldid=171387"
Community content is available under CC-BY-SA unless otherwise noted.