Coffinwell is a very Gothic town in Dragon Quest IX. It is located to the northeast of Stornway. With a great deal of high stone-made walls, the town's design is similar to that of an fortress, and is shaped as a shield. The Mayor's house is the highest house in the town. Staircases can be seen around the town.

Initially, its residents have contracted a deadly disease which is plaguing the entire town. The sickness is related to the nearby Quarantomb.

When you reach the pass that King Schott has recently opened, you go through and head north. You reach Coffinwell and see that the townsfolk are deadly ill here. According to the man in the front of the town, Coffinwell's "days are numbered", meaning Coffinwell's citizens will die soon. The hero then heads to the biggest house in the town, Mayor Laria's home. You see him on the second floor studying old manuscripts (however he isn't making much progress). He sees you and asks you to go to Dr. Phlegming's lab to the west of town. Then you take the house directly to the west and see a woman. Her name is Catarrhina. She is Dr. Phlegming's wife. She takes you to the lab and has the doctor open the door.

The hero walks in to see a man who introduces himself as Dr. Phlegming. He is studying why the town has come down with this disease. You tell him the Mayor's message and he reads it, saying that long ago, there was a shrine known as The "Qurarantomb" and that when the people saw it, they rather rashly decided it to be a good idea to venture inside. A ghost of an unnamed king layed there, and to keep the ghost there, the people made a terrible disease and sealed it away. But during the recent Earthquake, the seal has broken and the contagion has gotten to all the citizens.

You go back to Mayor Laria and he gives you the Quarantomb Key, which you are to give to Dr. Phlegming. When you do, he says he will need someone to help him because of all the monsters. When you reach the tomb, you venture in and at the seal chamber, you see the broken seal and a monster reveals itself. It is the Ragin' Contagion. He has been doing this and you must stop him. Meanwhile, Dr. Phlegming is fixing the seal to trap the Ragon Contagion once again. When you defeat him, Dr. Phlegming fixes the seal and successfully seals away the Ragin' Contagion for good.

When you get back to the town, every one is cured, but Catarrhina is dead. Because of this dark event, everybody cannot help but feel sad, preventing any benevolessence from being obtained. The Hero has to fix this. Mayor Laria tells you to come to his house in the evening to collect your reward. Compared to other gifts you get for beating the boss (Angel Falls, you get Stornway Inn, and for Wight Knight and Morag you get treasure in Stornway Castle) this one is not so great. He gives you a feather hairband.

When you exit, you see Catarrhina's ghost asking you to take Phlegming around town to see who was ill. When you finsh, you exit the town and go back to the Starflight Express, because now you have Catarrhina's benevolessence. This ends Coffinwell's story.

You can learn the party trick "Provoke" in Dr. Phlegming's laboratory.

Outside Tower of Nod

Note: Quest #039 must be completed to access this area.

The following items can be gathered on the maps in this region: 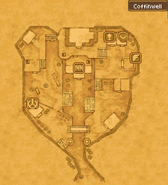 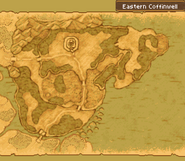 Retrieved from "https://dragonquest.fandom.com/wiki/Coffinwell?oldid=135992"
Community content is available under CC-BY-SA unless otherwise noted.