Corvus is a major character and antagonist in Dragon Quest IX. He is a Celestrian, was once Aquila's mentor and the Guardian of Wormwood Creek.

As a Celestrian, Corvus has long blond hair and blue eyes. He wore his Celestrian outfit. He appears in this form during flashbacks recalled by Serena and during a later stage in Dragon Quest IX's main story.
A spoiler draws near! Click 'show' to display, otherwise run away!
When he was imprisoned by the Gittish Empire, his hair grew longer and his clothes became ragged and torn. His eyes changed to a slight red, and his wings were a mix of demon and angel. During the final battle, Corvus changes to a full demon. He no longer has hair, and his eyes are pure red. He has pure black horns with golden spikes. On his wings, there are two wide eyes with a brown outline. He wears bits of armor, has three-toed feet and a tail.
Thou hast defeated the spoiler.

In some ways, as a Celestrian, Corvus was like Aquila: strict, but kind. He trusted humans, but also seemed detached. He did, however, get along with other Celestrians, with Pavo creating the Rapportal, as a sincere gesture of loyalty towards his teachings.

There are many moments throughout Dragon Quest IX where Corvus' multi-faceted personality is displayed, usually told through flashbacks, dialogue with other characters, through quests and when reading books.
A spoiler draws near! Click 'show' to display, otherwise run away!
When he fell to Wormwood, he was more closed off from the other humans and was only shown speaking to Serena and her grandfather. When Serena admitted she almost didn't believe in Celestrians, he seemed hurt.

Regarding his relationship with Serena, the two got along and fell in love. In flashbacks, Corvus was loving and protective. When he heard Serena in trouble, he had no problem attacking the Gittish Empire. Despite that, he still couldn't move on when he thought that she betrayed him and did not know of her death.

During his imprisonment in the Gittish Empire, Corvus slowly lost his sanity. As neither Celestrian nor human had come to save him, Serena's "betrayal", and the countless experiments finally broke him. He renounced the Celestrians and started using the Gittish Empire to his needs.

After the 300 year old misunderstanding via Serena, Corvus is remorseful of his actions.
Thou hast defeated the spoiler.

Corvus is a Celestrian and the Guardian of Wormwood Creek and also the mentor of Aquila. He is often regarded by Celestrians as the most successful in his duties as a Guardian. One Celestrian even goes as far as saying that "[Aquila's Guardianship is] the second best since records began, in fact. You must follow your teacher's example and collect much benevolessence." alluding to Corvus being the best throughout his Guardianship.

There is a memorial for him in the Observatory, as Celestrians think that Corvus had been taken from them and that it is likely he is no more.
A spoiler draws near! Click 'show' to display, otherwise run away!
During his time as a Celestrian, Corvus fell from the Observatory in a similar fashion to how the Hero fell during the prologue. In fact, their stories are essentially parallel such that the Hero's story seems like an attempt to break the cycle that Corvus went through. While the Hero fell multiple times, they both coincidentally fell to the same spot in Wormwood Creek.

After Corvus falls from the Observatory, he is greeted by Serena and her father, who are both villagers of Wormwood Creek, the village he has Guardianship over. Similar to how Wallace gives the Hero hospitality, Serena takes care of the injured Corvus and leaves him to rest.

During his rest, there is a commotion outside where the Gittish Empire have invaded Wormwood Creek. Serena, her father and other residents are confronted by the soldiers and Serena's father begs for mercy. They came for Corvus, with the intentions of apprehending him and taking him to Gittingham Palace. Corvus is awakened and comes to the aid of his village, striking the foe with a lightning ability akin to Kazapple.

After this incident, Serena is worried in case Corvus overexerted himself and pleads with him to rest. Unlike the Hero who recovered quickly from their multiple falls, Corvus' fall seems to have taken a toll on him and he is bandaged up by Serena. During their time with one another, Serena and Corvus become very close, to the point where they grow feelings for one another. To thank Serena for her hospitality, Corvus hands her the Serene Necklace to which she stands in awe of its beauty and Corvus' compassion for her.

After giving Serena the necklace, a commotion occurs again outside. The Gittish Empire returns to attack the village, again to capture Corvus and threaten to harm his village. He wants to go and face the soldiers, however Serena convinces him not to due to his injuries. Serena hides her new necklace behind Corvus' Statue and flees with him while her father pleads with the soldiers.

They both arrive in Hope Spring, a cave. Corvus feels guilty about not protecting his village and is determined to go back. Serena offers him a special medicine which she claims will help heal him to which he accepts, although it was actually a sleeping potion to prevent him from going back as she did not want him to be injured further. Corvus drinks it and becomes incapacitated just as the Imperial troops enter the cave. Serena's father betrays him and Serena by allowing the Gittish Empire to take Corvus in exchange for Wormwood Creek's safety. When Corvus briefly gains consciousness he hears Gittish soldiers thanking the old man for complying, and believes Serena gave him the sleeping drought to capture him. Corvus is left feeling betrayed by the ones he loved the most, especially Serena. His misunderstanding sinks deep within his heart, while Serena and her father are both murdered by the soldiers, however he did not notice due to his slumber.

Corvus is taken to Oubliette, the prison deep beneath Gittingham Palace. There, he is completely forgotten by his peers. He develops a deep resentment against humans, including Serena, whom he believes betrayed him. While imprisoned, Corvus's evil power grows until he becomes powerful enough to strike the Observatory and the Realm of the Almighty greatly injuring its king, Zenus, and forcing him into seclusion. He also revives Barbarus, the evil dragon killed by Greygnarl some 300 years earlier, along with the whole Gittish Empire and its ruler. Although he has become ultra-powerful, he remains in prison in the Gittish Empire, allowing the empire to pursue his goal of destroying humans and Celestrians alike.

When finally confronted by the Hero/Heroine, Corvus laments about Godwyn's defeat and being alone again, before attacking the hero's party, realizing that the hero is unable to attack him due to his superior rank as a Celestrian. He then ascends with Barbarus to the Realm of the Almighty, corrupting it into the Realm of the Mighty.

Aided by the ghost of Serena, the hero ascends to the Realm of the Mighty, defeating the Triumgorate and later, Corvus himself, by becoming mortal and battling him. Corvus is surprised by the hero's newly found mortality, and seals himself in a chrysalis of dark energy. The Hero confronts Corvus, but Corvus sends Barbarus to attack the hero in his stead. After Barbarus' defeat, Corvus, having reached a fully demonic form (similar to Psaro's Secret of Evolution transformation) again battles the hero and loses. After being defeated, he prepares an attack powerful enough to destroy everything. However, he is stopped at the last moment by Serena, who appears in front of him and explains to him what really happened, including how she had always been searching for him even after her death. Moved by Serena's words, Corvus realizes that he had been wrong the entire time and reverts to his Celestrian form. He then apologizes to Serena for thinking that she had betrayed him and thanks the Hero/Heroine for stopping him, acknowledging the hero as Aquila's student. Afterwards, he and Serena ascend into the sky and turn into stars along with the other Celestrians. He tells Pavo about the Prayer pearl, which can change a Celestrian's destiny, wanting to atone for his student dying at Godwyn's hand, and is seen in the near end of the When a Star Wishes Upon You side quest talking with his student about Wormwood and falling in love with Serena, before departing.
Thou hast defeated the spoiler.

When you first fight him in the depths of Gittingham Palace, you are attacked alone (your party members disappear). You cannot attack, defend or use any skills, spells, or items. Due to you being a Celestrian, the laws do not allow you to attack your superior. You will automatically die after his first attack, no matter how high your HP is. The end of the battle followed by a cutscene, and after that, the hero is revived.

This time, you attack with your party. He won't use Disruptive Wave very often, but getting to full tension may be hard, since it takes 2-4 turns, and also may not reach 100 right away. The best possible weapons should be used, like Erdrick's Sword and the Falcon/Uber Falcon Blade. He is weak to light and fire, so Kafrizz and Life Fource are recommended. If possible, have your Priest/Sage heal with Multiheal and Moreheal. He can use Kaswoosh and Terrible Lightning that hits all party members. He can also Psyche Up, which can make these AoEs very dangerous. His physical attack is not very strong but he has a more powerful version in which he drops from the sky. He can also waste an attack on laughter, and all in all this is not a hard fight, as long as you are cautious when he begins psyching up.

This this battle, he has 4800HP, so the battle will be longer than before. Your party should ideally be low- to mid-forties in levels. The best weapons to use are Falcon Blades or Uber Falcon Blades (though during the first time fighting him you will probably only have one), and any other powerful weapons you have.

Warriors, Gladiators, or anyone else with high attack parameters can use all the attack and tension boosting they can get. If they can also equip a Falcon Blade, that really helps a lot. A Sage or a Priest must be on the lookout for injured members to cast Midheal on them. Multiheal is also useful for when he attacks the whole party.

The fallen angel is also weak to fire and light, so it's also recommended that Mages use Kafrizzle on him and Armamentalists use Fire or Life Fource on the direct attackers. If the player can spare a turn, Twocus Pocus on Priests or Mages could also be helpful. Minstrels are not that recommended unless they are the strongest attackers.

Corvus has several breath attacks; Chilly Breath, Dark Breath and Burning Breath (which inflicts paralysis). He can also use Kafrizz and Lullab-Eye, the last of which puts a character to sleep. He can use a physical attack, a variant that guarantees a critical hit, and a Combo Attack that deals four random hits, and can also use Disruptive Wave. When he is getting low on HP, he can use Meditation to restore 500HP, Psyche Up, and Magic Burst, his strongest attacks. Immediately following that, he has a skill that will restore his MP.

Corvus laying asleep, after Serena gives him a sleeping potion

Corvus' grave in the Observatory

Corvus and Serena after Corvus reverts to his Celestrian form IX 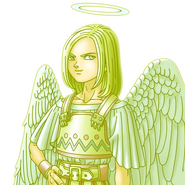 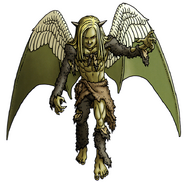 Corvus sets out to take his throne

Corvus on his throne in IX 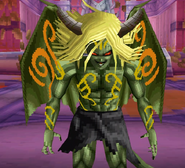 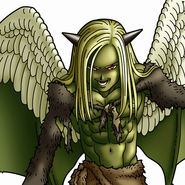 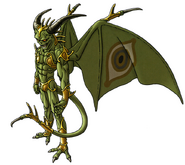 Corvus in the devilish cocoon in IX 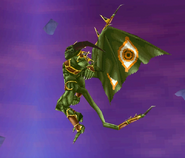 Corvus prepares to destroy all life

Corvus being interrupted by Serena 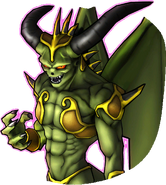 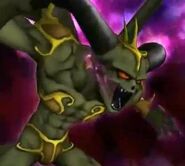 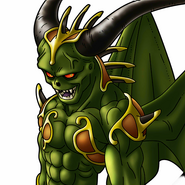 Retrieved from "https://dragonquest.fandom.com/wiki/Corvus?oldid=192460"
Community content is available under CC-BY-SA unless otherwise noted.