Crocodine is a major character in Dragon Quest: The Adventure of Dai. He is the Furfang Legion Commander under the title of Beast King. Debuting as a powerful antagonist, he eventually becomes a major supporting character to the heroes.

Crocodine is the Furfang Legion Commander, appointed by Hadlar. Less than a year before Dai leaves Dermline, to celebrate the formation of the Dark Army, the Dark King, Vearn offered an Infernal Emblem present to his lieutenants --a medal wrapped in flames to see who was the most loyal to him-- which Flazzard won.

In command of his own Legion, Crocodine would terrorise the kingdom of Romos something he was bored with as there were hardly any challenges to him. Hadlar soon contacts him and orders him to take care of Dai. Crocodine scoffs at the request of killing a mere kid, but Hadlar orders him to comply saying that Dai was able to critically wound him leaving Crocodine flabbergasted and interested on the new challenge.

Crocodine challenges Dai to a battle. Popp scoffs at Crocodine as being a lower ranked henchmen boasting that they sent Hadler packing. Crocodine goads him to prove it and Popp casts a Frizz spell which is easily countered by Crocodine's breath. The Beast King soon demonstrates his might, terrifying Popp and leaving Dai as he fled. Dai and Crocodine engaged in a tough battle, and although Dai was able to deal some damage, Crocodine ultimately gained the upper hand through his Vacuum Axe and Heat Breath. Popp soon returns with Maam who heals Dai with her weapon, and Dai subsequently blinds Crocodine of his left eye. Crocodine is then forced to retreat while vowing revenge.

Hurting from his eyes, Zaboera then visits Crocodine to offer his help and a plan of his own, to use Brass , Dai's adoptive grandparent placed in a Magic Cylinder as a hostage and weapon against the young hero. Crocodine protests this idea as dirty, but Zaboera convinces him that if he fails again, his position and reputation would be in peril. Crocodine begudingrily accepts the sage's proposal.

Crocodine leads a massive invasion to the Romos castle along his army with beasts of all kind storming the palace. Crocodine easily deals with the guard and keeps the king alive as he plans to lure Dai out. Dai does come to face him and the two fight. Surprised at Dai's growth, Crocodine decides to use his trump card and summons Brass, leaving Dai powerless against his grandfather and injured. Maam angered at the underhanded tactic employed calls Crocodine an hypocrite and coward with the Romos guards following suit. Crocodine roars at them to be silent and reaffirms his vow to abandon his pride if it will give him victory, much to Zaboera's pleasure as he's watching from a Heyedra.

Crocodine blasts Dai and Maam with his strongest, Beast King Anguish Blast, leaving them injured and with victory within his grasp. Maam tries to heal Dai but the Heyedra prevents her from using her weapon. As all seems hopeless Popp appears furious at what Crocodine has done and vows to defeat him. Crocodine then proceeds to duel against Popp who demonstrates great bravery and skill but is unable to defeat the Beast King, instead resorting to one last measure as he bashes his rod into Crocodine's plat, breaking his own weapon into pieces in the process. Crocodine doesn't understand his tactic as he proceeds to beat Popp, but the latter throws fragments of his rod around Brass allowing him to cast Glimmer thereby, purifying Brass from Hadlar's influence. Both Crocodine and Zaboera are left speechless at this feat. Crocodine tries to understand what moved Popp so far, and the latter claims that while he wanted to live, he couldn't bear to keep on living while leaving his friends behind to get killed as he has his own pride, and that even if he failed to beat Crocodine it still allowed Dai to fight without restraint.

Popp's words resonate with Crocodine as he realizes how low he had fallen to achieve a win he was unsatisfied with. Before Crocodine finishes off Popp, Dai awakens, now furious at the Beast King for his dirty tactics and unleashing the power of the Dragon Knight which destroys the Heyedra and freeing Maam. Crocodine decides to fight as he has already thrown everything for the sake of victory. He attacks Dai with his Vacuum Axe but the latter grabs it with his bare hand and crushes part of it before sending Crocodine crashing into a wall. Crocodine readies his Beast King Anguish Blast once more, but Maam heals Popp allowing him to throw a sword at Dai so he attacks Crocodine with his own Avan Strash giving a critical injury to Crocodine who admits his defeat and apologizes for having fallen so low, praising the heroes particularly Popp for teaching him the importance of his own pride. With no regrets for being defeated and as a form of repentance for his misdeeds, Crocodine jumps from the walls of the castle while wishing Dai good fortune. His defeat is witnessed by his army and they flee while carrying their leader away.

After having been defeated by Dai's and Popp's teamwork, he is inspired by Popp's courage and joins the party. He has many beasts still under his control, despite Hadlar's influence throughout the world thanks to his Beast King Whistle.

Crocodine is proud and extremely confident of his extreme power, so much that he tends to look down on others. This is not unjustified as his physical strength is greater than Hadlar's and has been able to fell many warriors himself. Crocodine looks for a challenge that can satiate him and initially didn't think much of Dai until being informed he was able to wound Hadlar. He was able to praise the young hero and was an honourable combatant.

He took a brief turn for the worse through Zaboera's manipulation, obsessing over victory and his position and followed with Zaboera's dirty tactics to destroy Dai by using hostages, discarding his pride in the process. Although victory was within his grasp he begun to feel disgusted with himself and what he had become after watching Popp's selfless courage to defend his friends and his own pride.

After being defeated he actually felt grateful for being beaten as he was reminded of the importance of his own pride, saluting the youngsters who were able to best him and offering a sincere apology for his misdeeds. Eventually he returns to the Dai's party as an ally after being inspired by them and becomes one of their greatest allies.

Crocodine is a massive anthropomorphic pink crocodile-like lizard with four fingers. He lost his left eye to Dai during their battle in the Dark Forest.

His Beast King armour is regularly damaged. It lost its left armlet to Dai's Earth Slash and its torso cracked from his Wave Slash during the Dark Forest battle. It was fixed by the time Zaboera came to him with a plan to defeat to Dai, but his left eye stayed permanently blinded from an Earth Slash.

In Romos Castle, he destroyed his right armlet and shoulder when casting his Beast King Anguish Blast, his cape was damaged by Popp's Kafrizz and his armour torso was cut through by Dai's fatal Avan Strash. His Vacuum Axe was damaged by Dai with his Dragon Crest.

After being healed by the Resurrection Fluid, he got a new armour but the torso was pierced trough by Hyunckel's blade. After being rescued by the Undead Legion his armour was intact.

In the first battle against Baran, his torso was pierced by 4 finger holes from Draconic Aura. He destroyed his left shoulder pad and armlet when cating a Redemption Blast. His right armlet was destroyed in the second battle. His Vortex Axe was heavily damaged in the battle and destroyed against Dragonoid Baran but a Vortex Axe Returns Mark II was crafted by Baduck using the original jewel and Papnica metal.

As one of the six legion commanders, Crocodine was an incredibly powerful fighter in his own right. Out of all commanders he had the greatest physical strength claiming he was superior to Hadlar himself. A very strong warrior, he excels in direct combat overwhelming foes with his great power. Not only does he possess fearsome herculean strength, but he had a tremendously hard hide that was able to repel blades which only the strongest attacks can penetrate.

Due to being a warrior, he is unable to use spells himself, but he can more than compensate for this drawback through several means. His signature Vacuum Axe is a weapon infused with magics, allowing him to cast the likes of Woosh. He could also employ certain techniques like Heat Breath to expel a paralytic blast from his mouth, a secret trump card he uses to incapacitate his foes before finishing them off. His strongest technique, Beast King Anguish Blast, is a burst of aura energy expelled by concentrating his strength and ejecting it in a terrifyingly destructive stream of sheer kinetic power. He later renames this technique as Beast King Redemption Blast after joining the heroes. After rigurous training, Crocodine learned how to perform Redemption Blast in each hand but with opposing rotations. By combining both of them, Crocodine creates the Beast King Indomitable Blast which traps the enemy in two streams of colliding forces which are so brutal they can tear apart even Orichalcum.

Crocodine could to a certain degree protect himself against spells, particularly those of the fire element. He could easily blow away Popp's Frizz by breathing it away, but he had to shield himself via air currents through his axe to prevent damage from his Kafrizz. His weapon changes over the course of the series allowing him to employ more powerful spells.

Crocodine had control over beast monsters, despite Hadlar's influence due to his Beast King Whistle. He developped his inner eye enough that he could send a Redemption Blast at Baran with both eyes blinded.

He is also able to use a powerful Heat Breath and once he got Lon Berk's Great Axe, he was able to send Bang and Frizz spell with it as well as his usual Woosh. 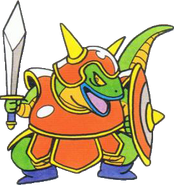 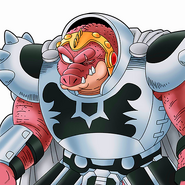 Character profile from chapter 61 of the comic series 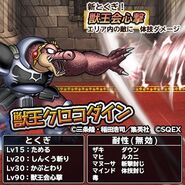 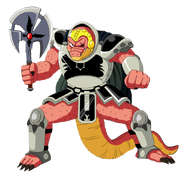