Debora Briscoletti is a playable character exclusive to the DS and mobile versions of Dragon Quest V.

Debora prefers expensive clothes and spends considerable time on her makeup. Her jet black hair, revealing attire and piercing eyes give Debora a somewhat intimidating look. She is adorned with a fuzzy boa and jewellery like bracelets and a necklace and (while inpractical) she wears stiletto shoes.

Because she was given whatever she asked for as a child, Debora has a very impatient and bossy personality that rubs most people the wrong way, even her own father. She has a bit of a reputation in Mostroferrato as an ice queen that should not be crossed and anyone who is brave enough is just begging for trouble.

Debora also seems two-faced, as when Mr. Briscoletti has Nera's suitors come into their house, she makes it seem like she has no interest in marrying anyone, but when her father reveals they are there for her younger sister, she seems insulted or just arrogant about being brushed off so easily by her father. She does this with the Hero as well; when he has to pick between Nera and Bianca, she then takes a sudden interest in him. If he does pick her, she acts arrogant claiming he was always infatuated by her (even though he had little to no contact with her prior to this meeting) and if he does pick another bride, she angrily berates the Hero for not being enough of a man for her.

As a wife, Debora treats the Hero more like a servant then a husband, making it clear from the start that she is the one wearing the pants in their relationship. She confesses she married the Hero only because he seemed the type that would do everything for her and expects to be treated like a princess and anything below that would be unacceptable, she also only joins the Hero in his quest for his mother so that she can keep her eye on him. Despite all that, she does treat the Hero with some affection at times, calling him pet names like "hubby" and "darling" and even caring for his well being when they visit the ruins of the Hero's old home, commenting that she wants him to rest a bit after seeing the destruction (this however could be interpreted as her wanting him to always be in top condition so he can take better care of her though). She shows affection in humorous ways though saying that he "is the best servant I ever had and could never replace him". At times she also expresses fear that the Hero would actually leave her. When the couple reach Whealbrook and talk to the soldier who deserted from Coburg, she expresses fear about the Hero "deserting" her and if reassured he wouldn't ever do so, she shows relief and even a bit of joy.

As a mother, she comes off as very strict towards her children, and at times leaves them a bit sad or upset, but she does make it clear that she only is so because she worries for them. She is in fact very loving and nurturing as shown in the game's cutscenes and in game dialogue. The children also have a good relationship with her and love her as much as she loves them. Although they do express surprise to know their Father would marry such a fiery-tempered woman.

The player will first meet Debora at the start of the game where she is still a child, seeing both her and her sister for a short time before moving on in the story.

During the time between generation one and two, Nera is sent away to live in Heaven's Above Abbey, Debora however is likely deemed too rebellious and so is able to stay with her parents her whole life, which adds to her already spoiled personality. Debora is then the only child in the house and as such gets away with everything she does and always makes sure she gets all she ever wants with just a snap of her fingers.

Debora is then seen again in generation two, when the Hero is brough to the Briscoletti manor to become a suitor for Nera. At first she doesn't think much of the Hero and during their brief run in, she doesn't even say two words to him. During the time where the Hero has to think about which girl he will pick to be his bride, the player can bring him to Debora's room at night. At first, she brushes him off as a "scruffbag", but does seem a bit interested in him when she hears that he learned that she was Nera's older sister and decided to seek her out in the night.

The following morning, the Hero is summoned to the Briscoletti Manor. There Mr. Briscoletti presents him with Nera and Bianca and asks him to pick between the two girls. All of a sudden, Debora comes down the stairs and approaches the Hero, seemingly intrigued (and perhaps with a bit of a crush) she decides that she will "allow" him to marry her, much to the shock of her father. But she nonetheless dismisses his complaints and tells him that he "isn't in touch with how young men think these days" and then commands him to hurry up and choose her as his bride.

If she is chosen as the Hero's wife, she gloats about how she was obviously the right choice (as well as getting a compliment out of Mr. Briscoletti saying the Hero "is a lion-hearted man"). While the Hero goes out to get the wedding veil, Debora is taken to try on her dress. The Hero then returns to find that Mr. Briscoletti wishes for him to use Zoom so the wedding can take place aboard his casino ship, the Ventuno. However transporting so many people makes the Hero collapse from exhaustion, which frustrates Debora as she "hates lay-abouts", but she does show concern and even understanding for his collapse.

After the wedding, Debora starts taking somewhat of a shine to the Hero, even referring to him as her "hubby" (though she does still treat him as a slave). She convinces the Hero to let her join on his quest to rescue his mother Madalena, but does have to convince her father to let her go with him (which she does easily, all the while frustrating him to a boiling point). She does express that she always dreamed of being able to travel the world on her own without her father breathing down her neck, so she feels some gratitude towards the Hero. After they receive Mr. Briscoletti's blessing and he lets them use his ship, they use it to reach the queendom of Helmunaptra. There, Queen Cleohatra mentions that she knew the tale of Pankraz and that the Hero is actually the Prince of Gotha, so they set out to find his lost home (though Debora expresses some disbelief that he could actually be a prince).

After reaching the town of Battenberg on their way to Gotha, Debora collapses, but the incident is brushed off as her just being tired from the travelling and feeling faint due to being so high in the montains. However when they reach Gotha and she collapses once more when metting King Albert, it is revealed she is with child and that she kept it hidden from the Hero due to "not being any of your business", but despite saying that, she still agrees that she should rest so that she could deliver the children he deserves. The Hero then sets out to complete the Rite of Passage that the Gotha household requires when a young man is to become king. He returns successful to Gotha and it is then that she gives birth to the twins that she reveals that Rodrigo Briscoletti isn't actually her father but that Nera is indeed her real sister. She is infact half-Zenithian and as the prophecy predicts, she will bring the Legendary Hero into the world, to deliver it from the evils of the demon realm, Nadiria (though she has no idea of the blood running trough her or her role as the Legendary Hero's mother).

During the Hero's coronation however, Debora is kidnapped, but before she is taken away, she is able to instruct the children's nanny to hide herself and the children. The Hero then sets out to save her regardless of the cost, but things take a turn for the worse when Ladja (the monster who killed Pankraz) appears and turns the couple into stone statues, in which they remain for 10 long years so he can prevent the Legendary Hero from ever being born, unbeknownst to him, the child has already been born and is in fact safe and sound, thanks to Debora.

Later, she shows up again in generation three, in which her statue is being kept in the temple the Hero was forced to build for ten years in slavery as a symbol of worship. After the Hero and her children are able to defeat the temple's priest, they receive the Ring of Life and with it and with Madalena's help, they bring back Debora who is able to move once again and is reunited with her children and husband after 10 years. The family is then ready to go into Nadiria to finally save the Hero's mother and defeat Grandmaster Nimzo.

"Hero, I feel your pain. But you must be strong. Turn the pain into anger… Fan the flames… And then turn it all on Nimzo and make him pay."

"All of the pain and suffering my dear family has had to endure… All of it was Nimzo's doing. I'll make him regret the day he dared anger me, more than he could possibly imagine."

If she was not chosen as a wife of the Hero, she will not marry anyone ever, due to her incredibly high standards for a husband and so just stays in Mostroferrato doing most of the same. The commentary from the townsfolk imply that Debora is simply disliked too much by the locals, further commentary from her mother seems to imply that she has simply given up on being happy, and uses material possessions to ameliorate her depression.

Debora appeared in the Quester's Rest as downloadable content. She gave the player Debora's Dress.

The Luminary can visit the Briscoletti mansion on the eve of the wedding via the Echo Chamber in the 3DS and Definitive Edition versions of the game. Due to the actions of a monster sealed away by her ancestor Rodolfo, Debora has been turned into an exact duplicate of her father on the eve of her wedding day. Thankfully, the groom is still away from the mansion and the monster has been located in Alltrades Abbey.

Debora is more concerned about fitting into her wardrobe when transformed than anything else, complaining that none of her clothes fit anymore. When spoken to after the event is over, she fumes over the absence of the groom and calls him a useless boy as she wonders where he is.

Appears as cards in the game both as an adult and as a child.

Debora appears as a recruitable Hero in the Dragon Quest V event. Her Coup de Grâce is Livid Mode.

Debora is more of a physical fighter than Bianca or Nera. She has the most limited spell selection but can equip several of the more powerful swords and Hela's Hammer. There are a few equipments unique to her, such as the Diamond Akillics and Floral Parasol. Due to her high agility attribute and the aformentioned acrylics Debora is adept at slaying metal monsters. 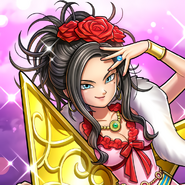 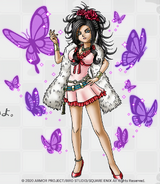 Debora is an Italian feminine name and a variant spelling of "Deborah", derived from the Hebrew for "bee".