For the monster family in the Dragon Quest series, see Demon family.

Dragon Quest: The Adventure of Dai
Demons, [source needed] or Darklings in The Adventure of Dai, are, generally speaking, a recurring humanoid race of beings who come from a sort of Hell-like location, such as Nadiria. Most of them viscerally despise humanity and would like to see them wiped out, and some go to great lengths to bring this about, allying themselves with various monsters, sometimes corrupting themselves into hideous forms. It is also possible for humans and other races to transform themselves into Demons thanks to dark and often evil rituals, examples of this being Nimzo, Corvus, Mordegon, and Fractos. It is quite common for powerful human-hating demons to be the leaders of vast armies of monsters, attacking the world in an attempt to conquer it; in fact most of the primary antagonist in the Dragon Quest series can be classified as belonging to the Demon race, either by birth or due to transformations.

That said, some Demons are sympathetic to humans and wish to strive for peaceful coexistence, but the general consensus is still that humans have monopolized the world, which should be for everyone, and forced the far fewer demons into Hell with their prejudice and outright violence.

Unlike with other races, their morphology can potentially vary widely from individual to individual. The Japanese word means both a sort of "Demon" or "Magic". In Dragon Quest IV, the term is conflated with "monster".

In Dragon Quest IV, the word is translated as and conflated with "Monsters". The current Lord of the Underworld, Estark, in the past discovered and used the Secret of Evolution to transform himself into the supposed ultimate being, but was subsequently locked in a tomb underground in Mamon Mine a thousand years before the beginning of the story, remaining asleep until human excavators accidentally reached his tomb. Psaro, a demon at the head of a vast group of monsters, seeked to wipe out humanity in a misguided attempt to better the world for monsterkind and the other races, so he tried to reawaken him. However, the Hero and their party defeats him. With Estark defeated, and his elven lover Rose killed by humans, Psaro fell into despair and resorted to use the Secret of Evolution on himself in order to avenge her. In truth, Psaro's own desire to wipe out humanity was being orchestrated by Aamon, his right hand man, so that he could take his position as the Master of Monsterkind after Psaro and the Hero wiped each other out. But after the Chosen use the mythical Yggdrasil flower to revive Rose, her love for him is strong enough to return Psaro to sanity and, learning of Aamon's treachery join forces with the Chosen, getting revenge on Aamon and truly brings peace to the world by ending his feud with humanity.

In Dragon Quest V, in Nadiria, Grandmaster Nimzo is waiting for the Zenithian Hero, and has sent various demons to terrorize the world in preparation for his arrival. In addition, he is Aamon's last disciple, having mastered the Secret of Evolution better than what Psaro & his master could do.

The Demon race as whole is greatly expanded on in Dragon Quest X. At first the primary antagonist met, Nelgel, Demon Marshal Zerudorado, and Madesagora, are demons that the Hero needs to defeat to restore peace in Astoltia, leading to the initial misconception that all Demons would be evil, due to a usual Brave and Hero duo that would appear to defeat the Demon King attempting to invade the world.

After Nadraga & Kyronos's defeats the demon's pocket dimension, Nadiria, lacking a supreme ruler with Madesagora's death, starts to undergo a power struggle, with increasing frictions between its various kingdoms. Pujyu takes Kyronos's Shock seed to open the gate to the demon realm, after which Valeria comes out with a small army and defeats the Hero. The Hero is however rescued by Yushka, and their skin turns purple, temporarily becoming a Demon themselves, after which Yushka helps out the Hero to regain his normal self.

As the Hero personally discovers during their journey across Nadiria, many demons, while fiery with their emotions, have actually noble and even kind souls not too dissimilar from any member of the other races. After uniting the fighting kingdoms, The Oracle reveals that the primordial evil Jagonuba had in fact created the Demon race from kidnapped Humans, Ogres, Wetlings, Poppets, Dwarfs, and Elves that were converted with corrupting magic. This had been subtly hinted from the beginning by the general appearance of the Demons as, in this title, while some do have more exotic looks, sporting for example multiple arms or eyes, the vast majority of demon-kind have physical elemets reminding of their origin race, such as fins from the Wetlings, Ogre like features etc. While it would make sense that even Dragons were among the people kidnapped and corrupted by Jagonuba, no Demon individual that can without question being classified as such has made an appearance so far.

Due to their origins, the Demons are the only humanoid race of Astoltia that lacks both a patron deity and a divine beast.

The Darklings are a race living in the Underworld. Hadlar who was the Dark Lord tried to conquer the lands above but was defeated by Avan and resurrected by the Dark King Vearn, another darkling and a god of this underworld.

Other known members include Zaboera, his son Zamza, Lon Berk and the human hybrid Larhalt.

Dragon knights are hybrids of Humans, Dragons and Darklings; inheriting the Magic Power of Darklings, at the time of the dragon knight creation.

They were shown to have wings but none of their members were shown to have them in present time. A blood of a Darkling is blue, Hadlar has two hearts and Vearn has three. They have powerful magical powers, special abilities, and they have their own language and can transmit it through mirrors using a spell. Scenes in the Underworld show that female exists, and when naked Zamza seemingly did not have genitals. They have regeneration abilities so great they can grow back limbs. They also have longevity, being able to live for at least centuries.

They can by evolved with monsters traits, as discovered by the Superior Being studies. 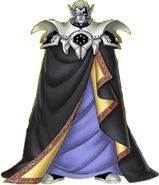 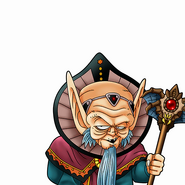 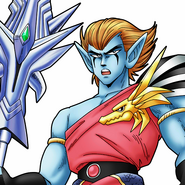 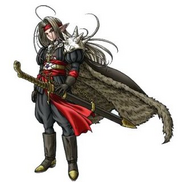 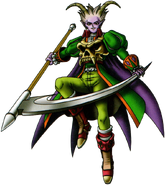 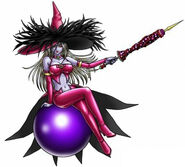 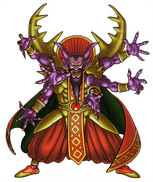 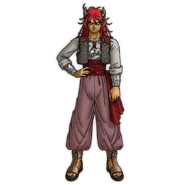