VI
The demon-at-arms is a monster who appears in the Dragon Quest series.

First appearing as a boss, the demon-at-arms is a general in monster armies. Even as a normal enemy, it still acts like a general, as seen in games like Dragon Quest Heroes I and Dragon Quest Heroes II. Regardless, they are strong monsters that can cause some trouble for a ill-prepared party.

Making its debut as a demon general sent to kill the spirit of the Hero, it attacks Weaver's Peak with Boss trolls, Sintaurs, Bad karmours, & Berzorkers catching the townspeople off guard, believing that the world was at peace since Murdaw was killed, despite evidence to the contrary. After fighting the monsters terrorizing the citizens, the Hero and his party see the Demon-at-arms duking it out with the Hero's spirit (Since Murdaw's petrification trick didn't turn it into a statue). The Hero can choose to talk to the spirit, gaining the Zap spell in the process and weakening the monster, or just fight the general directly. Either way, the Hero triumphs and Weaver's Peak is saved. 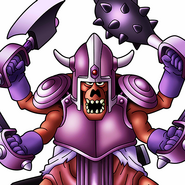 The first Demon-at-Arms, as seen in Dragon Quest of the Stars.
Add a photo to this gallery

Retrieved from "https://dragonquest.fandom.com/wiki/Demon-at-arms?oldid=187701"
Community content is available under CC-BY-SA unless otherwise noted.