Such a pity.
— Dhoulmagus, usually before or after defeating an opponent

Dhoulmagus is an important figure in Dragon Quest VIII. Until his defeat at the hands of the Hero's party, he is apparently the player's central enemy in their journey. Lord Rhapthorne, however, is the true villain of the game, and had corrupted Dhoulmagus's mind with his staff which he wields in battle.

Dhoulmagus has long, flowing white hair and pale skin, along with a red marks painted across his eyes, almost resembling scars. He wears an attire similar to that of a stereotypical jester, with contrasting colors (In this case, purple and red), as well as baubles hanging off his clothes.

A flashback in the Nintendo 3DS version shows that Dhoulmagus originally had long black hair and fair skin. His attired consisted of white pants, a red shirt, and purple vest.

His second form resembles a demonic harpy, with two short black horns, large blue talons, and red feathered wings. Most of his back is violet, and his arms, legs, face, and tail are a light blue. His teeth are noticeably sharper and his eyes glow yellow.

Not much is known about Dhoulmagus' personality before he was taken over by the Scepter, but it is known that he is quite ambitious, stealing it to become the greatest magician of all time. The Nintendo 3DS version reveals that he was nervous a lot around Rylus and was known to be impatient, wanting to learn magic, and was usually upset at the fact that Rylus refused to teach anything until he believed that Dhoulmagus was ready. After a scolding from Rylus however, he became cunning, as evidenced by him posing as a jester to gain access to Castle Trodain. He insults Trode and Medea, calling the former "King Toad", and is impressed with Trode knowing about his real intentions for visiting the castle.

After becoming possessed by the scepter, he becomes a servant to Rhapthorne's will, performing villainous acts as he travels across the land in search of the Seven Sages' descendants. He even derives pleasure from the suffering of others, freezing people like Allistair in place before slowly walking towards them and killing them.

Dhoulmagus is a jester who came to Trodain Castle. His deep desire to be the greatest magician of all time and resentment towards those who laughed at him fuels his breaking into the castle's secret chamber to obtain the legendary Scepter of Rhapthorne. Almost immediately, he was overwhelmed by Rhapthorne's power and was made to do such dastardly things as his pawn. Possessed by Rhapthorne, he killed his first four victims: His former master Rylus, the swordsman Alistair (Jessica's brother), Abbot Francisco of Maella Abbey, and Mr. Golding, the casino owner of Baccarat. The Hero and party eventually defeated him after a long chase, where the Scepter's dark influence transformed him into a monstrous creature. Upon his defeat and death, King Trode discovered that the curse on him and his daughter, Medea, had not been broken. Shortly after, Jessica would retrieve the Sceptre, and become enthralled by its malicious power.

The Nintendo 3DS version reveals that he had been an apprentice under Rylus, the direct descendant of one of the seven sages who had defeated and sealed Rhapthorne, for many years. However, his time as an apprentice was mainly spent doing household chores, since Rylus did not believe he was ready to learn any magic. What little magic he did know, he had taught himself, but thought it was nothing more than cheap parlour tricks. One night, while reading through one of his master's grimoires, despite being told not to without Rylus' permission, he comes across information regarding a scepter sealed away in Trodain Castle. After reading more about it, he believes that if he can get his hands on the scepter, he would be able to wield any magic he wanted.

Just then, he is caught by his master, who yanks the book away from him and insults him, stating that he would have been off with a dog as an apprentice. Angered by his master's words, he runs off and heads to Castle Trodain. Disguised as a jester, he uses what magic he knows to impress King Trode, who allows him to spend the night in the castle. He knocks out a guard after blinding him with the same trick and goes to claim the scepter. After claiming the scepter and cursing Trodain Castle, he confronts his former master, who apologizes for what he had earlier and reveals that he had been creating an elixir that would have allowed Dhoulmagus to awaken his latent magical potential and allow him easily learn any magic that he wanted. When he turns to face Dhoulmagus, he is shocked at both his new appearance and seeing the scepter in his hand. Just then, Dhoulmagus knocks Rylus off balance and kills him. He then proceeds to burn down Rylus' house before leaving.

His human form is quite formidable, but his demonic form is truly powerful and not to be underestimated by the player's party.

In Dragon Quest VIII, Dhoulmagus is a very powerful opponent compared to most enemies fought at that stage. In his first form, he summons two copies of himself which use the same abilities as him, and all three must be defeated to advance. The three possess heavy blows which strike multiple members, such as hurling rubble by telekinesis, or firing thousands of whips like strands out of his scepter. The doppelgangers can also use Midheal, making any attempt to damage them awkward, which further contributes to the difficulty of this boss. He can attack with a "disruptive wave of energy" described in some guides as wave of ice. Rather than dealing damage, this removes every positive effect from the party, resets their tension, and negates Oomph, Acceleratle, Buff, etc. The danger of this is that it not only halts any large scale offensive, but also makes the party vulnerable to his own attacks. More conventionally, he can use very powerful fire and ice spells, as well as a normal attack. Fortunately, he has a tendency to burst out laughing, wasting turns.

Dhoulmagus's second form appears as a Legacy Boss, his map can be dropped from Murdaw at level 16 or higher (and thus can be obtained multiple times).

Dhoulmagus before being possessed by Rhapthorne in DQVIII 3DS version 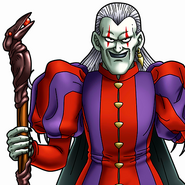 Dhoulmagus, as seen in Dragon Quest of the Stars 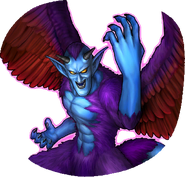