Dhuran is a boss monster first encountered in Dragon Quest VI, and is a recurring monster throughout the Dragon Quest series.

Dhuran resembles a well-built male human with a reddish skintone. He wears a dark, simple, iron-like armor that doesn't cover much of its body. This attire is completed with an indigo cape. He also wields a double-bladed weapon. This weapon is similar to its armor and has a black handgrip and two sharp, dark blades in each extreme.

Despite being an enforcer of the Archfiend, Dhuran displays a noble attitude towards the heroes. For the sake of a fair fight, he orders his henchmen to allow the heroes to approach him unharmed. After they pass his tests and prove they are indeed worthy adversaries, Dhuran fully heals the party so that they would not start the battle against him in a weakened state (as opposed to his less ethical peers, namely Murdaw). After they defeat Dhuran, he expresses gratitude that they have provided to him a noteworthy battle and harbors no resentment for besting him in combat. As a show of gratitude, he provides them information about the Archfiend and the true nature of what they are up against. Overall, Dhuran seems to value the sport of battle above all else, and is able to set aside his evil nature for the sake of fair combat. This even extends to his appearance in Dragon Quest Heroes II: Twin Kings and the Prophecy's End, where despite working for Fractos, he commends Lazarel, Teresa and their allies for a good fight and wishes to cross blades with them in the next life, although he wonders if such a life exists.

Dhuran, Lord of Stormsgate Citadel, is the final Dread Fiend the party encounters. When the party comes to reach him, his castle fights them - he is presumably controlling it in some way, though it could just be leftover magic from the deceased Murdaw, given his powers over the dream world.

After the Hero and his party defeated the Stormsgate Citadel, Dhuran orders his minions to let them in without conflict. Upon their entry into the throne room, he stated his surprise that they were able to gather the legendary equipment needed to reach the castle and tests their strength with an Uberkilling machine and an Iron tortoise.

They beat the minions, prompting Dhuran to pit Terry (who offered his soul to him) against them. They succeeded in defeating Terry, resulting in Dhuran healing them so that he can fight them at their best.

Upon his defeat, Dhuran confessed that he, along with Murdaw, Jamirus, and Gracos, are merely minions of of the Archfiend, Mortamor. He told them that they will have to become much stronger to take the Archfiend down, and hopes that he and the Hero can meet in the next life to do battle once more.

In Dragon Warrior Monsters, Dhuran (spelled as Durran), is the boss of the Gate of Reflection and the game's final boss. His dialogue and battle scheme are references to his first major appearance in DQVI. The only differences are his battle skills and intial battle, in which he sends out two Servants. After defeating the two underlings, he sends out a future clone of Terry, whose sprite shares the same pose as his main series counterpart.

Alluding to the first game, Dhuran appears as a monster recruited by Terry, and can be fought alongside a GreatDrak and Watabou. However, the player must beat the game and have over 200 monsters for Terry to appear in the Arena's hallway.

Dhuran appears as a synthesis monster and is used to create Nokturnus . The recipes for both monsters are as follows:

Dhuran = Any Rank A monster + Any Demon monster 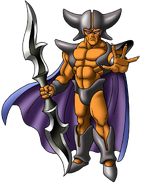 Dhuran's appearance in DQVI.
Add a photo to this gallery

Retrieved from "https://dragonquest.fandom.com/wiki/Dhuran?oldid=172001"
Community content is available under CC-BY-SA unless otherwise noted.