Don Mole isn't much different from the other Memoriam bosses, though his performance can cause confusion. Use multi-hitting attacks to damage him and get rid of his Soul Moles. Aside that, he shouldn't be too tough.

The Hero ready to fight Don Mole in Memoriam. 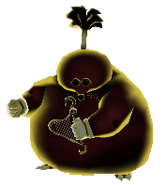 Retrieved from "https://dragonquest.fandom.com/wiki/Don_Mole_in_Memoriam?oldid=172909"
Community content is available under CC-BY-SA unless otherwise noted.