XI
Dora-in-Grey is a boss monster who appears in Dragon Quest XI.

When first encountered by the Luminary and his companions, Dora-in-Grey takes on the form of a young, red-haired human girl named Dora.

In her true form, she takes on the form of a gigantic doll-like creature with white-gray skin, long, wavy green hair, a beautiful face with red, glowing semi-circular eyes and no visible eyebrows, hands with articulated joints, and a large, green bird-cage with thorns takes the place of her legs. She wears the Magic Key around her neck like a necklace, a purple Renaissance-style ballgown with red frills and gold lining, a three-pointed tiara adorned with sapphires, and a pair of large, spherical sapphire earrings. This form is used as the basis for the Iron maiden monster line introduced in this game, as well as Dragon Quest X, retroactively.

Obsessed, unscrupulous, and sadistic, Dora-in-Grey takes great delight in stealing the souls of humans by enticing them with tempting promises of riches and trapping them within her mural. She is also incredibly narcissistic and hubristic, thinking highly of herself and thinking herself as the personification of artistic beauty, while looking down on others, regardless of appearance, as "ugly", with Mordegon being a notable exception.

Dora-in-Grey is the spirit of a cursed mural in the town of Phnom Nonh, found in the ruins of Nhou Wat. The mural itself is designed to trap people in an alternate dimension so that Dora may steal their souls, which become part of her masterpiece. To acquire victims, she tricks people into going to see her mural, which promises wealth and good fortune, though for the pure of heart, she instead preys upon their compassion, using the guise of a lost girl.

The Age of Legend

During the age that followed Erdwin's legendary battle, Dora-In-Grey was brought to the ancient kingdom of Nhou Wat by Mordegon. It is implied that the inhabitants of that ancient kingdom were drawn into her painting, explaining their swift and complete disappearance.

The Road to Yggdrasil

The rediscovery of the ruins of Nhou Wat served as an economic boon to the town of Phnom Nonh, bringing visitors from across Erdrea. Sure enough, the resurgence of Mordegon's forces came to Dora's attention, once more drawing visitors to her mural. She would absorb many visitors into her mural and feast on their souls, until the arrival of the Luminary and his party. She would appear twice to the hero and Sylvando under the guise of Dora, attempting to lead them to the ruins in search of her 'missing parents'. When it became apparent that the mural was the source of these disappearances, and it was revealed that the young girl Dora was merely part of her trap, the party confronted her in the town's plaza. She taunts the heroes and retreats to her mural.

Having navigated the Other Side of the mural, Dora reveals her true form, and her intentions to the Hero and his party, before trying to trap them in her world. She is defeated, leaving the magic key behind and freeing all of her prisoners, but not before she ominously warns them of Mordegon's looming victory at Yggdrasil.

Despite swearing to return when Mordegon rises to power, Dora-in-Grey never appears again after her defeat, although several monsters that strongly resemble her, like the Iron Maiden and the Golden Girl, do appear during the World of Darkness scenario.

Her name is a pun on The Picture of Dorian Gray, an 1890 novel by Irish poet and playwright Oscar Wilde. Her scheme is the opposite of Dorian's story; while Dorian's portrait becomes more tainted with every sin he commits, yet remaining young and handsome, Dora's masterpiece becomes more beautiful while the humans of Phnom Nonh have their souls stolen. 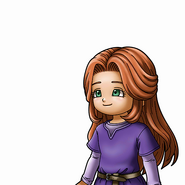 Dora, as seen in Dragon Quest of the Stars
Add a photo to this gallery

Retrieved from "https://dragonquest.fandom.com/wiki/Dora-in-Grey?oldid=191636"
Community content is available under CC-BY-SA unless otherwise noted.