Dourbridge is a town in Dragon Quest IX. It is located northeast of Bloomingdale. The western exit lead to Slurry Coast. Captain Max Meddlin, the mini medal collector is found here. The town is built under a bridge that links Slurry Quay and the Dourbridge region.

This shop is only available after acquiring the

Ultimate key in Gortress. When you enter the building behind the old man's item shop, you'll see a walled off section on the left. You should be able to spot the the location of the door from that room and then go round the outside to enter it.

You won't be able to see the door from the outside because there's no camera rotation allowed in this area.

The following items can be gathered on the map in this region: 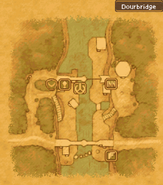 The region.
Add a photo to this gallery

Retrieved from "https://dragonquest.fandom.com/wiki/Dourbridge?oldid=159509"
Community content is available under CC-BY-SA unless otherwise noted.