Dragon Quest: Legend of the Hero Abel (ドラゴンクエスト 勇者アベル伝説, Dragon Quest Yusha Abel Densetsu), originally released as Dragon Quest (ドラゴンクエスト) and as Dragon Warrior in the United States, is a Japanese animated TV series loosely based on the first four video games of the Dragon Quest series, especially leaning heavily on elements of Dragon Quest III. The show tells the story of Abel and his efforts to rescue his beloved Tiala from Baramos.

The TV series was first broadcast on Fuji TV every Saturday at 19:30 from 2 December 1989 to 22 September 1990 for part one and every Friday at 16:00 from 11 January 1991 to 5 April 1991 for part two, achieving a total of 43 episodes plus one extra summary episode. It was later re-broadcast since 1996 on other networks, such as TV Osaka, Channel NECO and TV Shizuoka. However, the re-broadcast differs from the original in number of episodes: episode 32 was edited with episode 33 to become a single episode, decreasing the total of episodes from 43 to 42. The DVD release restored both episodes to normal and also added the Legend of the Hero Abel epithet.

In the Ariahan village, on her 15th birthday, Tiala receives a red jewel from the elder Yogi. The jewel is the key to awaken the Great Dragon, whose blood grants eternal life. Due to this, the demon Baramos kidnaps Tiala. His childhood friend, Abel tries unsuccessfully to save her. He is given a blue jewel, the counterpart of the jewel that Tiala received, that can seal the Great Dragon and embarks on a mission to rescue Tiala.

Despite being divided in two parts, the series is a single season. The series was temporary discontinued after the broadcast of the first 32 episodes, to be resumed a few months later for the remaining 11, which lead to calling them part 1 and part 2. In its original time slot, the series competed with TV Asahi's Obocchama-kun and TBS' Quiz Derby.

In the original episode 32, an old woman is telling a story to two children, a boy that looks like Abel and a girl that looks like Tiala. While not explicitly stated, it is implied that the old woman is Tiala and that all the other protagonists, except Abel, died. Around half a year later, the broadcast was resumed on a different time slot and it immediately showed that the other protagonists had not died, and that Moco, who should have died, just fainted. The original version of episode 32 as well as the original episode 33 have not been available since the original broadcast.

There was also a summary episode broadcast on 13 January 1990 exclusively on the original Fuji TV run in which the first four episodes were recapped after a holiday break between this and the previous episode.

Saban Entertainment distributed the first 13 episode of series in syndication in the United States under the title Dragon Warrior. This was prior to the anime boom of the 1990s, which, combined with poor time slots,[1] meant that the series wasn't successful, remaining in syndication only and never fully dubbed.[2] While the dub was uneven, the series was left mostly unedited, including the original score.

The series was released on VHS and DVD. The DVD restored episodes 32 and 33 to their original state, restoring the series to its original 43 episodes and added the epithet Legend of the Hero Abel to differentiate it from other Dragon Quest media released since the original broadcast, such as Dragon Quest: The Adventure of Dai and Emblem of Roto.

The series has been available via video on demand since 2018 on several digital distribution services like Niconico (through its d Anime Store), Prime Video and Fuji TV on Demand (FOD). This digital version, however, has the edited episode 32, so it only has 42 episodes. 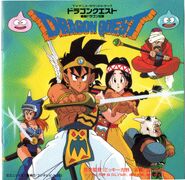 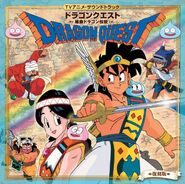 Dragon Warrior - Abel Yuusha - Lost Episode ENG SUB
The edited episode 32/33 that has been used in all broadcasts, home video & VOD besides the original Fuji TV broadcast and the DVD release

Retrieved from "https://dragonquest.fandom.com/wiki/Dragon_Quest:_Legend_of_the_Hero_Abel?oldid=181175"
Community content is available under CC-BY-SA unless otherwise noted.