Dragon Quest: The Adventure of Dai (ドラゴンクエスト ダイの大冒険, Dragon Quest: Dai no Daiboken) is a 1991 TV series that adapts the first 87 chapters of the homonymous Japanese comic series. The animated adaptation was first teased with a pseudo-pilot short film with the same name released a few months earlier as part of the Toei Anime Fair Summer '91.

Like the comic in which it's based, the series takes multiple elements from the Erdrick trilogy, in particular from Dragon Quest III. The focus of the series is the adventures of Dai as he meets several characters in the course of the story, from training to become a hero to genuinely trying to save the world.

Animated by Toei Doga under the chief direction of Nobutaka Nishizawa and music by Koichi Sugiyama, the series was first broadcast in Japan on Tokyo Broadcasting System every Thursday from 19:00 to 19:30, from 17 October 1991 till 24 September 1992. The series was released for home video on VHS format only.

On January 6, 2020, the whole series was released in Japan for distribution on several video on demand (VOD) services, the first time the series has become officially available after the VHS release of the 1990s.[1]

On March 13, 2020 it was announced on the Dragon Quest Dai Anime Twitter account that the 1991 anime will be getting a Blu-ray Box for the first time, and will be released on July 3, 2020. The set will contain all 46 episodes, and the 3 Jump Festa short anime films, (including the first film never released on home video until now) which have been scanned from their original 35 mm negatives with high resolution and recorded with high-quality full HD remastered images.[2] [3]

The story begins in the island called Dermlin where the boy named Dai lives with monsters. He is the only human being in this island and he was brought up by monsters. When he becomes a young boy, monsters suddenly get insane and threaten Dai. Hadlar revives again in this world and his evil will makes monsters mad. And there, the hero Avan and his magician apprentice Pop came to the island. Their magic prevents the evil will from spreading in the island. Dai begins to study magic from them to become a hero. Then they begin their adventure to the other world out of the island. He learns magic, finds armors and meets friends through the journey, and he will finally become to the legendary brave to destroy Hadlar. However, there waits a lot of evils and monsters on the way of their great adventures![4]

A group who act as heroes, but are really just after money.

The first home video release was on VHS in April of 1992. From then till June 2007, there were no other releases of the show. No DVD or Blu-ray existed. in June 2007, there was a new master that aired on the Toei Channel for a limited time. After the new master had its run on the Toei Channel, no re-airing of the anime happened. On December 21, 2019, Toei Animation announced that a new TV anime was in the works, plus the 1991 TV anime would be made available in Japan on several VOD services (Amazon, U-NEXT, Bandai, Video Market, etc) starting January 6, 2020.

The VHS tapes were released by Pack-In-Video from 24 April 1994 till 26 March 1993. The series was divided in six arcs, the first five with eight episodes each while the last one with six, for a total of 23 tapes. Each tape runs around 44 minutes.

The Blu-Ray BOX set will be released on July 3, 2020 by Happinet and will cost 42,000 yen plus tax. It includes all 46 episodes, and 3 short anime films on 6 Blu-ray discs all in Full HD. Early pre-orders will also come with new illustrated merchandise by Gome-chan. Amazon Japan bonuses include an A4 clear file, B3 clear poster, and mini tote bag.

The TV series was released in several countries besides Japan. In Italy, the series was broadcast by Junior TV in 1998, Italia 1 in 2002 and Italia Teen Television in 2003. In France, it was broadcast on TF1 in 1994 and AB1 from 2001 & 2005. In Spain, Canal Sur, Telemadrid were the broadcasters in Spanish, while Televisió de Catalunya was the broadcaster in Catalan.

In Latin America, the series was broadcast in several countries: in Mexico by TV Azteca, in Peru by América Televisión, in Chile by Chilevisión and ETC, in Brazil by Sistema Brasileiro de Televisão, among other countries.

The series was also broadcast in the Arab world by Spacetoon.

Name in other languages 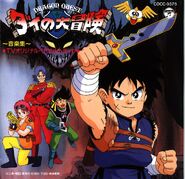 Logo as seen in the opening 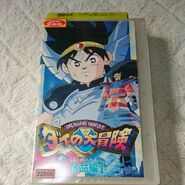 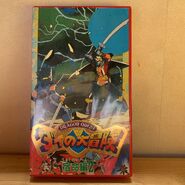 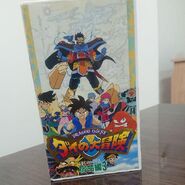 Retrieved from "https://dragonquest.fandom.com/wiki/Dragon_Quest:_The_Adventure_of_Dai_(TV_series)?oldid=180179"
Community content is available under CC-BY-SA unless otherwise noted.