Dragon Quest: The Adventure of Dai - A Hero's Bonds

Dragon Quest: The Adventure of Dai - A Hero's Bonds

Our hero (the player) has been transported to the world of Milladosia, where the bonds between people are reflected in the very shape of the earth beneath one's feet. As the story begins, Milladosia is being ripped apart by Xevallo, the "Lord of the Void". With the aid of an enchanted dracky aptly named Pinky and the cast of the Dai no Daibōken universe, the new Luminary Leader is tasked with restoring the world by re-establishing the bonds between heroes forged in ages past. They are destined to one day meet and vanquish Xevallo.

A Hero's Bonds combines elements of a hack-and-slash action game with the movement mechanics of a maze-runner. The player controls the leader of a party of up to four units as well as the first of their partner characters, and is able to switch freely between each unit. The remaining pair is largely AI-managed. The party must complete each mission as efficiently as possible to obtain its rewards. All battles are fought in waves, and include stagger-break mechanics as well as the ability to dodge and cancel foes' powerful moves while they are being invoked.

In addition to basic attack, defence, and movement mechanics, each unit has sets of skills that are either innate or applied from drawable equipment. Once equipped, the player accesses skills according to an active-time gauge so that when a particular gauge fills, the skill tied to it can be unleashed as the player sees fit.

Units, skills, and equipment are acquired through a "Treasure Hunt" gacha that in turn uses Blue (free) or Red (paid) Gems as currency. The player can then upgrade any weapons and skills as needed using various enhancement materials in order that overall combat power for the selected party is raised.

Social accounts for the global release of A Hero's Bonds have been active since mid-March 2021, and contain posts about the characters in the spin-off. At the same time, Square Enix also launched an open-enrolment beta for Android users.

Following an announcement in early September 2021, A Hero's Bonds was released to all platforms as of 28 September.

Both the writer and the artist of the original manga, Riku Sanjo and Koji Inada, were involved with the game. 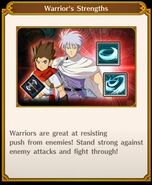