Like the first film, Avan's Disciples was animated by Toei Doga. It was theatrically released in Japan on 7 March 1992 at the Toei Anime Fair of spring of 1992, screened alongside Dragon Ball Z: The Return of Cooler and Magical Taluluto 3: My Favorte Takoyaki.

The short film was released for home video at the end of 1992 and has not been re-released since then.

The story takes place between episodes 18 and 19 of the TV series. The port of Sophia in the Kingdom of Romos is a lively port town full markets, people from many countries and multiple sailing ships. Dai and his friends, Popp and Maam arrive in order to take the ship that the king rented for them. Shortly, a giant monster appears and attacks the city. While Dai's group defeats it, the ship was damaged and the harbour was destroyed. At night, a mysterious creature watches them. The following morning, they are blamed for the incident and are to be attacked by a group of disgruntled sailors, but a mysterious man helps them escape. The man turns out to be Captain Nelson, who was constructing the ship for the heroes under order of the King of Romos, but was unable to complete before they arrived, so the ship is intact and the captain will be able to take them to Papnica. Dai and his friends have to guard the ship before that.

In the night, monsters appear and attack the town. While the group is fighting them, a mysterious knight appears and helps them defeat the enemies. The knight is Avan, which surprises Dai, because something about him doesn't seem right, but Pop and Maam seem to believe him. No long after, this Avan turns out to be Verdosa, a minion of Zaboera. After a furious battle, Dai defeats Verdosa. The following day, the ship is ready sets sail towards Papnica with Avan's disciples.

But, no mention is made of Brass who presumably is stored in a Magical Cylinder before being dropped on Dermline Island. Also, Hadlar is waiting for the 4 Legion Commanders to arrive, the call for them being made at the end of chapter 32. Also, Popp teases Dai on his crush with Leona, while Maam is there although in the manga she only learned about it on the boat.

The fawn scene was originally created in episode 12 but in the film, Maam manages to use Midheal while in the series Avan showing her with an unnamed heal-type spell. The failed attack-spell Magic Ritual was not shown in the series.

The film, introduces the name of Nelson, which was later used in chapter 135.

In collaboration with Aoni Production 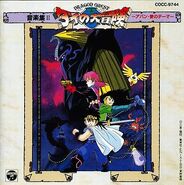 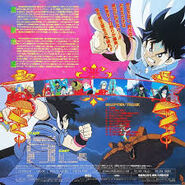 Retrieved from "https://dragonquest.fandom.com/wiki/Dragon_Quest:_The_Adventure_of_Dai_-_Avan%27s_Disciples?oldid=207939"
Community content is available under CC-BY-SA unless otherwise noted.