Like the first film and the second one Six Great Generals was animated by Toei Doga. The movie was theatrically released in Japan on 11 July 1992 at the Toei Anime Fair of summer of 1992, screened alongside Dragon Ball Z: Super Android 13! and Rokudenashi Blues.

Following the defections of Crocodine and Hyunckel and the death of Flazzard, Hadlar ponders the situation when Galvus, the Great Dark Army Tactician who had been working behind the shadows, shows up and informs Hadlar that he and his team will take over and will defeat Dai and his allies.

Meanwhile, Dai and his friends are relaxing after helping with the reconstruction of Papnica. Suddenly, a black cloud appears and shortly after Dragon General Beglom, Furfang General Zangrey, Shadow General Double Dora, and Blizzblaze General Breygun, start attacking the citizens. Dai and Popp confront them and notice that they are different from Hadlar's legions. Galvus shows ups and present himself. Elsewhere, Undead General Deathskull and Mystic General Menero, are attacking Leona, Maam, Apollo, Marin and Aimi.

Menero injures Maam, which allows Deathskull to steal her soul as planned, so Galvus calls his generals to retreat. Breygun ignores this order since he thinks it's a good chance to destroy Dai, who is rushing to help Maam, but Dai destroys Breygun's dragon instead. Later on, Galvus punishes Breygun for disobeying and points out that only working together they will be able to defeat Dai. Galvus plans to use Maam's soul as bait for a trap.

Leona is unable to restore Maam with her magic. Matoriv identifies the ultimate spell used that steal a person's soul and informs them that they have 24 hours to return the soul to her body before Maam dies. Galvus sends Dai a message to force him to go alone to try to recover Maam's soul. With the forest that guards Maam's soul poisoned, Galvus gives him an antidote that can only be used by one person. Dai forcefully takes it and drinks it. However, the antidote is in fact a poison as well, so Dai gets affected by it once he's in the forest.

All six generals attack the weakened Dai, but, despite this, Dai fights back and kills Beglom. Menero attacks him constantly, but Popp and Leona arrive to save him. The rest of the generals attack them and appear to have the upper hand. Suddenly, Crocodine and Hyunckel, who were contacted by Matoriv, arrive and turn things around. One by one, the remaining generals fall, until only Deathskull and Galvus remain. The two try to destroy Dai with energy beams, but are opposed by Crocodine's and Hyunckel's own beams. Dai uses the opportunity to attack Galvus, allowing Crocodine and Hyunckel to overpower and defeat Deathskull.

While Hyunckel and the rest gather around Dai, who appears to be dying, the souls of the six generals gather around the fallen Galvus and infuse him with power, making him revive and become more powerful. Galvus easily overpower everyone else. Maam's soul communicates with Dai and her soul does the same that the generals' soul did with Galvus. With this, Dai easily destroys Galvus. The film ends with Maam opening her eyes.

In collaboration with Aoni Production

Flazzard is dead and Hadlar reacts alone to the half extinct 6-point symbol. He reacts to the same events but with a crowd in chapter 73

Dai's metal protector is fixed but he is still missing his headgear. His steel broadsword is still functional.

Maam is still part of the party 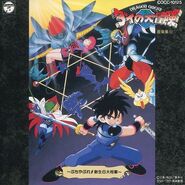 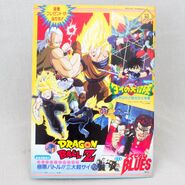 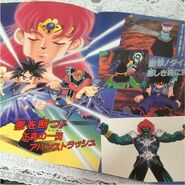 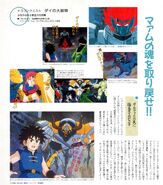 Extract from Jump Comics Perfect Book 1: The Adventure of Dai

Retrieved from "https://dragonquest.fandom.com/wiki/Dragon_Quest:_The_Adventure_of_Dai_-_Six_Great_Generals?oldid=207944"
Community content is available under CC-BY-SA unless otherwise noted.