Once upon a time, many years ago, there was a long and terrible war. When the war finally ended, the people of the world made a solemn pact never to fight again. The world was divided into seven realms, and peace reigned for a thousand years.

One day, cousins and fellow knights-in-training Lazarel and Teresa reunite in the Kingdom of Harba, far from their Dunisian home. Little do they suspect that the Dunisian army is about to invade, with their old friend Prince Cesar at the helm.

The long-kept peace is broken and the world descends into chaos. With the aid of the High King’s envoy, the cousins must travel to Accordia for a meeting with the Supreme Sovereign of the Seven Realms to find a solution and bring back peace to the world!

Dragon Quest Heroes II features a mix of hack-and-slash combat and more traditional RPG elements. Exploration of the world will be similar to other Dragon Quest games. Players can explore the land and move from one town to the next, while also initiating dungeon-like battle stages. While exploring, players will discover treasure boxes and ingredients. Weather also plays a factor and rain will result in a curse ailment being inflicted on the players during a battle.

Cross-platform play options and save data sharing are present. Having save data from the previous title grants Luceus and Aurora costumes for this game's protagonists. Dragon Quest Builders save data grants "Builders Wooden Hammer" for the protagonists' use. Downloadable content so far includes costumes, weapons, and multiplayer options.

A Nintendo Switch version was announced and will be released combined with the first game as Dragon Quest Heroes I + II. Ragnar McRyan has been added to the main cast of the second game. 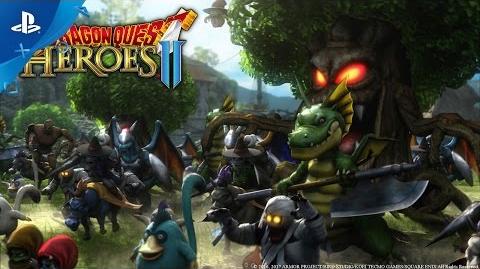