Dragon Quest Monsters: Joker 3 (ドラゴンクエストモンスターズ ジョーカー3) is a Nintendo 3DS console role-playing game published by Square Enix. It was released in Japan on the 24th March 2016. It was not localised for English-speaking audiences, but a fan-translation for Professional is avaliable online.

Joker 3's gameplay follows after the previous two entries in the franchise, with players exploring the Break World and its component parts, creating a team of monsters that will eventually unravel the mystery behind the protagonist. This entry marks the first game in the Joker series to contain platforming elements, as well as a fourth monster slot, monster riding, and more. With over five hundred monsters to collect, DQMJ3 has one of the most diverse monster sets of any Dragon Quest Monsters game.

Joker 3 begins with an unnamed scientist sending a beacon before he is attacked by robotic monsters. The protagonist, bearing resemblance to the player characters of previous Joker games, wakes up in a paradise land. There, the beacon alerts him to the illusion around him, and the player meets a female character who gives them some information before leaving. The player leaves the Remains of Paradise and approaches Wood Park, having met one of the inhabitants of this world, the Nochorin. They have their first encounter with a Break monster - conventional monsters that appear to have been corrupted by dark magic.

The player then leaves Wood Park, alongside the Nochorin people, to colonise the last human city. They find the Fallen City in disarray and must find a way to re-enable the power to make the city habitable. Once the player does so, they identify a signal that connects the Fallen City with the Spirit Road, and they push on.

Here, they meet the ghostly inhabitants of this part of the Break World and learn of the evil Break Monster that has enslaved the spirits. The protagonist makes their way towards the Break Monster and destroys it, freeing the spirits, and they learn more details about the humans that once lived here. They also push on towards the Grim Tundra.

There, they are put into the middle of a feud between two rival "gangs" of monsters. Ultimately, the player learns that another Break Monster has been fuelling this fight and they assault the Iron Ark, putting an end to both the feud and the Break Monster. They also learn a human survivor remains at a core part of the evil Break Monsters' empire, the Darkiron Bastille. Connecting the islands together, the protagonist pushes ahead.

When they arrive, they are told it is impossible to assault the Bastille head-on, and instead, the player disguises themselves as a monster, getting captured within the prison and finding a way out. As they begin to infiltrate the facility, they learn here is where Break Monsters are created. Taking ordinary monsters and exposing them to concentrated Darkonium, they are transformed into evil versions of their former selves. Those Break Monsters the player has fought so far are especially potent creations, lieutenants of the evil Dark Master. The player ascends the Bastille, meeting with Lucia - the elderly woman leader of the human resistance - and face another lieutenant Break Monster that is defeated. The player goes to destroy the generator making more Break Monsters, but the Dark Master arrives with an escort. Lucia sacrifices herself to destroy the generator, and the player flees the Darkiron Bastille towards Mt. Elpis.

There, they meet an old companion, and also come face to face with Lenate, one of the few remaining human survivors who has been contacting the protagonist throughout the story. They defeat a Break Monster lieutenant guarding the entrance to a secret base, and there the truth is revealed - the player is a clone of a legendary Monster Master's little brother, alongside dozens of other clones, who have each died a hundred times to keep the world from falling apart. The Dark Master returns and makes another attempt at destroying the player and, now, the cloning chamber - before being defeated by the player. With all the pieces in place, there is only one goal left - and the player resolves to assault the core of the Break World.

At the core, it is revealed that Mother, a terraforming computer intended to make the Break World a new colony for humankind, has been corrupted by dark powers. The player presses on and goes to free Mother from these powers...before a reincarnation of the infamous Doctor Snapped emerges from Mother, and attacks the player. However, in a bid to save his own life, the new monster, Snapped-Off, merges with Mother, and transforms into a god-like being with the power of an entire planet - Snapped-Almighty. The player must face all of Snapped-Almighty's lieutenants, one after the other, before finally putting an end to Snapped-Almighty with Lenate's sacrifice. She was the purification key, a failsafe, and thus redeems Mother and returns peace to the world.

After the main game's story has concluded, the player meets Aroma, another survivor of the human resistance, and makes the protagonist aware of a way to save Lenate and stabilise Mother at the same time. They catch and locate the necessary pieces Aroma requires to construct her own purifier, and then, she and the player approach the Core once more. Before they can rescue Lenate, the Dark Master reveals he survived once again, and uses dark magic to convert himself into a more powerful, robotic for. The player must fight several incarnations of this creature, later revealed to be part Dragon (and thus named the Snapped-Dragon), before seemingly, they defeat the Dark Master. However, one final transformation turns it into a being fuelled by pure hatred and lust for power - Jormungandros. The player must defeat this final evil, destroying the Dark Master once and for all. Then, Lenate is rescued.

With the Break World fully secured, Aroma decides to rally a crew and make her way out into the stars, back to humanity's homeworld of Earth, in an effort to save it, too, from the monsters that overran the planet. The player and Lenate see her off, wishing her luck.

Dragon Quest Monsters: Joker 3 Professional (ドラゴンクエストモンスターズ ジョーカー3 プロフェッショナル) is an expansion of the original and the final installment of the Joker saga. As well as the new mechanics introduced in DQMJ3, the Professional version introduces a partner mechanic (with Nochorin being the player's companion throughout the game, and receiving the ability to transform into Wildcard later), the ability to ride in battle, and the ability to fuse two monsters together in battle and combine their strengths. Also, a new "drone" ability is introduced that allows it to collect unique items, scout out unique areas, and get a better view of levels than possible through monster riding. The Professional edition also included four new regions and around two hundred new monsters, bringing the total to around 750 monsters able to be collected. Lastly, Professional starts the player out with a more unique companion monster. Only one more of the starting four can be obtained in one playthrough; the rest must be obtained via trading.

DQMJ3P's story works more or less the same as the standard release of the game, with a few exceptions. First, the Incarnus is teased earlier on (whereas it was relegated to a side-quest during the previous edition of the game). Nochorin plays a more significant role due to their partner status with the player. The base game's story and post-story can be skipped for returning players, but the player does not obtain any monsters (besides those assigned to them by the plot) this way.

As above, DQMJ3P's post game story progresses similarly to the original's, until Aroma takes off for the stars. At this point, her rocket pod collides with a Pipit - the race of bird creatures from DQMJ2P's post-game story. Carrying with her a warning, this Pipit alerts the player, Aroma, and Lenate to the existence of a "demon gate" that is threatening to open up and destroy the world. The Incarnus - now lost - is the only individual capable of closing the gate and saving humankind.

The player is transported to the Incarnus World, a realm with giant, powerful monsters where the Incarnus - now revealed to be a species, rather than just a single entity like in prior DQMJ games - live. Their twin kings - Jester and Joker - need to be found in order to enter the demon world. The player activates beacons throughout the Incarnus World that restore power to an artifact called the Mirror of Ra. This artifact leads the player to discover the Nochorin people are actually Incarni that hid to protect themselves from the king of demons.

The player returns to the fallen city, and reveals the majority of the Nochorin there. It does not work on the player's companion Nochorin, however. When the player comes to reveal the Nochorin King, it turns out he is the Demon King, and has been hiding amongst the player and Incarni all along. He returns to his realm to open the demon gate and flood monsters into the world. The player must locate the eight component Incarni of both Jester and Joker. When they do so, it is revealed that Nochorin is the Wulfspade Ace, and now transformed, the twin Incarnus kings and the player assault the demon realm.

When they arrive, the player must destroy several crystals guarded by exceptionally tough monsters before being able to enter the Demon King's final dungeon - a winding, puzzle-focused maze filled to the brim with miniboss monsters and dangerous world encounters, as well as rare treasure rooms giving an easy way to monsters like the Platinum King Slime. Finally, the player enters the Demon King's throne dimension, but finds two monster masters from the past - the spirits of the Solitaires from DQMJ and DQMJ2 - have been resurrected by the Demon King to fight the player. The player defeats them, and the Demon King tries to corrupt the protagonist, before it is revealed they are of the same bloodline as the protagonists from DQMJ and DQMJ2, who are immune to the Demon King. The spirits of the past games' protagonists arrive and form a shield around DQMJ3's protagonist. Then, Jester and Joker combine into one form - a bipedal animal deity that hurts the Demon King enough for the player to face them. When he is defeated, Jester and Joker beg the Demon King to accept peace and let go of his ambitions. Seeing the error of his ways and the benefits of co-operation, the Demon King agrees, and monsters from the demon realm live alongside the inhabitants of the Break World and Incarnus Realm in harmony.

Aroma tries once again to make her way out into the stars, and this time succeeds, leaving the story of DQMJ at a close. After this point, the player can fulfil most of the same side quests as the base game, in additional to a few extras introduced by Professional like repeated battles with the Demon King to earn materials and renown, as well as gaining an infant form of Jester from the Incarnus Realm. 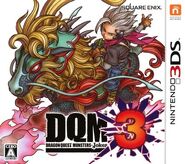