Dragon Quest Tact is a free-to-play strategy RPG videogame in the Dragon Quest series. It was released in Japan on 16 July 2020 and worldwide on 28 January 2021 for iOS and Android.

Long ago in the days of old, an evil Demon King ruled the world of Orchesterra until a man and woman with the Tact of Legend took a stand against the King with their fellow monster companions.

This man and woman led their companions to battle against the King and the King ended up being sealed away.

The world returned to peace but the stories of the man and woman were forgotten...

Much time has passed since...

And the Demon King's hand prepares to rule once again...

Dragon Quest Tact is an RPG that combines elements of both strategy and action to create an action, strategy RPG experience. It is a 3D gacha game designed for mobile devices that involves a main story as well as various scheduled events.

The protagonist can capture monsters by defeating them with their own monster team after a certain point in the game. Monsters in the monster team can be controlled by the player and made to attack enemy monsters on a top-down, tile-based field. Each monster has various skills that can be unleashed on the field against enemies. After Chapter 2, Episode 2 in the main story of the game, Auto-Mode can be used to automate the process of defeating enemy monsters.

Materials can be gathered through a range of methods and are used to upgrade the ranks & statistics of owned monsters. Their skills can also be enhanced through the use of magic books. Collecting monsters of the same species leads to them evolving and their skills to grow even further.

Each monster has a basic set of information that pertains to their rarity ranking, species family and combatant type.

The player wakes up to mysterious voices and is entrusted with a legendary item called the "Tact". Monsters around the world are under the influence of some strange dark power, making them violent, and the player sets out to investigate.

Dragon Quest Tact was designed based on Dragon Quest Wars, a DSiWare game that is no longer available, and brought to iOS/Android (mobile) in Japan on 16 July 2020. A pre-registration phase for the game began on 10 June 2020 to test the game and prepare it for release. It was first announced on 5 February 2020.

In late September 2020, Square Enix announced a Global version via social media, and held an open beta for Android users[1]. By mid-January 2021, Square Enix began taking pre-orders on all platforms. According to a post from the company dated 13 January, the game had already been downloaded more than 10 million times in Japan. Tact was available for download as of 27 January 2021, but was not online until the following day.

It is directed by Yuji Horii, the art was created by Akira Toriyama and the music was composed by Kobo Sugiyama. 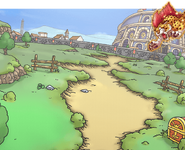