Dragon Quest Wiki
Register
Don't have an account?
Sign In
Advertisement
in: Dragon Quest of the Stars, Mobile games

End of Service in NA

As the descendants of the mysterious Questocrat, the player and their two siblings fought alongside a great hero against the Dark Lord of the Stars. The Dark Lord handily defeated them, sending them crashing onto Cyril's homeworld, where they awaken robbed of their memories as well as their possessions on a beach near the First Town. Only the Questocrat's book remains. With the aid of Cyril and his slime pal Gregooey, the player must uncover the secret of the tome and embark on their journey to vanquish evil across the galaxy.

Dragon Quest of the Stars incorporates mission-based gameplay. As the player advances the story, they travel between locations on fixed area maps and fight many species of monsters in transit or while exploring a dungeon area. Moving about a map requires the player to consume stamina that regenerates over time, the amounts increasing with the relative difficulty of each area. Players can also select a companion unit made available by other players to assist in combat.

Attacking in battle is automatic, while customisable skills operate on an active-time system. As the battle progresses, skill gauges assigned to each player unit fill up; and when full, units may execute their chosen skills. Chaining skills together in rapid succession increases damage dealt per turn.

Battles are scored against explicit mission objectives, with rewards given for each objective met in a given mission. When all objectives have been met, the mission is marked "clear". Regardless of progress, any story mission can be re-attempted at any time.

As a gacha game, Dragon Quest of the Stars offers various categories of equipment by means of lottery, using virtual currency purchased with real-world money or earned as the player progresses. The equipment can then be modified and assigned according to the player's needs and battle party.

Beside the regular story, a main feature of Dragon Quest of the Stars are the limited time events. The most important ones are Story Events, which are events with quest that reminiscence the main Dragon Quest games and give the player equipment, items and stamps related to said games.

On August 4, 2020 in Japan, the game received a surprise crossover with the Godzilla series of films in a joint collaboration between Square Enix and Toho studios. The kaiju that appear in the game are the Hesei-era versions of Godzilla, Biollante, Mothra, King Ghidorah, and Rodan. In addition, cosplay equipment based on the monsters and the Japanese Special Defense Force were made available as well.

On October 13, 2020, a crossover event with Dissidia Final Fantasy Opera Omnia was launched, starting a month-long campaign. Features in the game included Mog (the character and themed items of him) and Manikins as bosses. There were also banners with equipment based on Cloud and Warrior of Light and several other FF weapons, such as Yuna's Magistral Rod.

On January 15, 2021 in Japan, a crossover event with Monster Hunter Riders was launched. It featured classic monsters from the Monster Hunter series, such as the Rathalos, and a special crafting mechanic that allowed players to craft weapons, armour, accessories, and sigils based on various MHR characters, Felynes, and monsters. There were also several Monster Hunter-themed banners that offered the weapons and outfits of various MHR characters, including Halcion and Shino.

The game was released 15 October 2015 in Japan, and features stickers from popular LINE emoji artist Kanahei.

On 30 March 2021, Square Enix announced that the global game servers will be shut down on 30 June 2021. The company cited heavy impact from the ongoing coronavirus crisis on its Singapore facilities among the reasons for the closure. The short-form announcement follows: 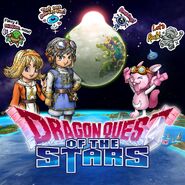 Greeting from DRAGON QUEST OF THE STARS