Dragon Quest (ドラゴンクエスト) is a series of role-playing video games made by Square Enix (originally Enix Corp.) for a variety of video game platforms. It is the all-time best-selling video game series in Japan, and enjoys decent popularity elsewhere as well. The series was referred to outside Japan as Dragon Warrior prior to the release of Dragon Quest VIII due to a trademark issue in the United States.

Each game in the main series of games it titled with the name "Dragon Quest" followed by a Roman numeral. Since 1986, which marked the release of the original Dragon Quest, Dragon Quest has so far featured eleven games within the main series, as well as several spin-off games. It has also featured two animated productions.

Dragon Quest is often compared with the Final Fantasy series, created by SquareSoft. Although the Dragon Quest series started before Final Fantasy, it continues to lag behind in the number of games within the main series (eleven Dragon Quest titles versus fifteen Final Fantasy titles). The two competed for more or less the same market until the companies' merger in 2003, at which point Dragon Quest began to take a backseat to the more universally popular Final Fantasy.

Every Dragon Quest game is told primarily through the eyes of a Hero named by the player, usually a prophesied "Chosen One" or a similar concept that requires him to rise against a new evil. Often, this evil is a Dragonlord or some kind of demon, but invariably wishes to take over the world and enslave or destroy humanity. Unlike other games in the genre, which have since the turn of the century begun to take on more of a science fiction slant, Dragon Quest tends to lean more towards traditional fantasy, with medieval technology and trappings. With certain exceptions, most games take place in a world distinct from every other; there is next to no direct continuity between instalments , with each game taking place in a world envisioned from the ground up ad hoc.

However, Dragon Quest I-III and IV-VI can be considered related through their storytelling. II is a direct sequel to the original game, while III is a prequel that effectively makes a trilogy; IV, V, and VI each feature the Zenithia castle as an important plot element, and so fans have come to call them the "Zenithia Trilogy." However, Yuji Horii has stated that this second group was never intended to be related.

Magic is frequently an important element, as both an in-battle ability of player-controlled characters and the cause of various world-shaking events.

As a pioneer in the RPG realm, Dragon Quest games have a reputation for being "bread and butter" representatives of the genre. The player advances through the game by carrying out predetermined actions directly related to the progression of the plot, such as collecting a key item or defeating a particular antagonist. Usually, one of his first orders of business is to gather a party of like-minded warriors to join him on his quest. As the party traverses the landscape and various dungeons, they will be forced to fight (or, if they choose, flee from) enemies based on a "random encounter" system. Later in the game, the party often acquires improved transportation that may allow them to avoid such skirmishes. Battles are turn-based; the player delivers combat instructions each turn from an in-battle menu system. Some games feature AI that sees all party members but the Hero character responding to situations based on various factors at hand, sometimes including general orders such as "Attack ferociously" or "Go all-out with magic."

Defeating enemy characters yields experience points (EXP). When a certain number of EXP has been accumulated, the character levels up and becomes stronger, improving in a number of areas represented by statistical values that affect their performance on the battlefield. This system means that if a player finds any part of a Dragon Quest game too difficult, he can simply fight against weaker enemies until he becomes strong enough to have an easier time of it.

Dragon Quest is, overall, a fairly lighthearted and humorous series that was likely not intended to be taken too seriously.

The Dragon Quest series is primarily the work of three men: Yuji Horii is the scenario writer and lead designer; Akira Toriyama is the character designer, bringing in a style reminiscent of his manga works; and Koichi Sugiyama handles the music production. 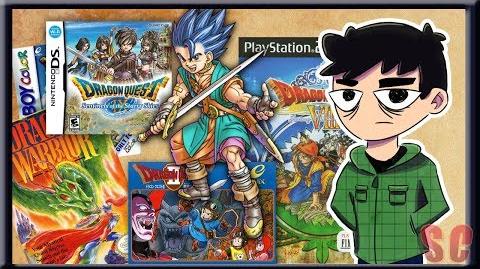 A Virtual Tour Of The Dragon Quest 30th Anniversary Museum!