Dragon Quest Wiki
Register
Don't have an account?
Sign In
Advertisement
in: Male characters, Articles to be merged, ??? family,
and 43 more
English

"I am the King of Kings... I am Dragonlord! I've been waiting for you."
— Dragonlord

The Dragonlord is the main antagonist and final boss of Dragon Quest. Before the game starts, he steals the Sphere of Light to bring forth monsters and unleash his forces of darkness upon the land of Alefgard; he also kidnaps Princess Gwaelin in the hopes of making her his bride.

The Dragonlord has two equally-distinctive appearances in-game; the former as a blue-skinned robed sorcerer that looks relatively human, and his true form, a massive, purple-scaled dragon far larger than any other. Because he appeared in the first game, his appearance in both forms is iconic, to the point which both versions are often aped or referenced both in Dragon Quest and out of it; from the Dragovian Lord assuming the pose of his dragon form during attacks to various parody works and fanworks.

The Dragonlord is hallmarked by a complex and often adversarial personality. At his core, the Dragonlord resembles an archetypal power-hungry despot: vain, arrogant, and willing to stop at nothing to get what he desires. Considering the era of games he originally appeared in, it would have been extremely easy to make him two or even one dimensional, but in practice he shows a depth that belies his rote antagonism.

The Dragonlord is opportunistic, clever, and brutally intelligent, and always operates with a plan. His tactics in Dragon Quest are often framed as simply being destructive, but the Dragonlord has a cold, calculating streak that is seen often in his behaviors, kidnapping Princess Gwaelin to demoralize the kingdom's rulers, stealing the Sphere of Light in order to deter would-be heroes, and destroying Damdara to destroy the kingdom's ability to fight back against his forces.

It's revealed in the Dragon Quest Manga and in Dragon Quest Builders that the Dragonlord sees humanity as just as corrupt as his fellow monsters - if not more so; and derives intense pleasure from turning its members against one another, seeing what he does as a sort of mercy.

A skilled manipulator, the Dragonlord is quite good at using people against one another, leading to his corruption of the Golem of Cantlin and its subsequently becoming the fortress city's greatest threat. No greater example of the Dragonlord's willingness to use human nature against humans, however, can be seen than by his offer to the Hero to join him; when cornered by the hero, the Dragonlord is willing to split the world between him and the hero and rule it as an ally. While anyone can see that such would be a devil's bargain to say the least, the temptation is nonetheless offered and shows a side of the Dragonlord that establishes just how skilled a manipulator he is. Even in Dragon Quest Builders' last chapter, where it's clear that the Dragonlord cannot be trusted, he still makes the same offer to the Builder, counting upon human nature once again to give him the upper hand. Doing so, the Builder may see him as a fool, as he says that the offering or the question is the same question that he asked upon the "previous visitor" to darken Alefgard and most likely says "No" starting a fight against him leading to him turning into a fearsome purple dragon (the 2nd stage of the fight), or the Builder gets fooled and says "Yes", likely handing their Sword Of Kings to the Dragonlord, leaving them weak against him and as an end result, the Builder gets killed and gets buried in a crypt; most likely the one back in Cantlin.

In battle, the Dragonlord appears as a humanoid sorcerer who possesses the skill of magic but is fairly weak, physically speaking. After receiving enough damage, the Dragonlord transforms into a more powerful, dragon form (his "true" form). The music also changes to the final battle theme.

The grandson of the Dragonlord resides in the same location in Dragon Quest II. He is a character of core importance as he informs the heroes of their need to collect the Crests and contact Rubiss.

Although not specifically mentioned, the Dragonlord inherits the castle once inhabited by Zoma, sometime after Zoma was defeated by Erdrick at the end of Dragon Quest III.

Also, according at least to the interpretation given by the Emblem of Roto manga, the Dragon Queen's egg could possibly be the unhatched Dragonlord.

The Dragonlord appears as a Legacy Boss, obtained as a rare drop from Greygnarl in grottoes. He attacks the hero in his second form and mostly uses melee and breath based attacks.

You should have a Priest and/or a Sage in your party. Equip that character with Minstrel's Manual to enable Gritty Ditty. The other three characters can be Gladiators, Warriors and/or Paladins. Equip these with Falcon Blades or Uber Falcon Blades. One of your fighters needs to have learned Fource abilities, equip that character with Armamentalist's Album to use Fources on all party members. Equip your healer and Fource caster with Meteorite Bracers or at least Agility Rings.

The Dragonlord (DracoLord at the time) acts as the boss of the Gate of Ambition and will attempt to draw Terry over to his side in the same way he attempts to bargain with the Hero in the original Dragon Quest. But even if replied with a Yes, he would laugh and still challenge Terry.

Game Description: This monarch was once bested by the Legendary Dragon Warrior in the days of yore.

The Dragonlord and his sorcerer form, Dracolord, are synthesizable monsters in this spin-off game; the former is a special case since it's one of two monsters which forcefully require a Captain Crow for its synthesis, the other being Dr. Snapped.

Dracolord can be obtained by synthesizing a Great Dragon and a Demon-At-Arms. For Dragonlord, it requires the two resulting monsters of a Dracolord, an Alabast Dragon, a Gem Slime and a Captain Crow.

Set in an alternate timeline from the events of the original Dragon Quest, in Builders the Hero fell for the Dragonlord's ruse and took his offer for half the world. Warping the hero's mind into that of a bumbling barbarian, no one stood in the Dragonlord's way as he cast the entire archipelago of Alefguard into darkness, resulting in the very land being split into smaller islands. Furthermore, the scaled sovereign placed a curse upon the population that blocked all memory of building from their minds: while a person may recognize the individual materials used to construct something, the moment they move to craft, the curse activated and sealed the person's memory of how the materials are used, effectively sending the population to the stone age and forcing them into an arduous existence living off the bare expanse of the despoiled land.

From his perverse perspective, the Dragonlord considered this to be an act of mercy as he stated that through building, humans rebel against their fates and in turn only bring upon more misery to their lives. He explained that he had no choice but to muddle everyone's minds, for if he did not the world would be thrown out of balance and fall into ruin. As the Builder is the last remaining vestige of the spark of creativity, they must be snuffed out under his heel. During their journey, the Builder themselves would personally see just how dreadful the actions and further manupulations perpetuated by the Dragonlord have brought misery to Alefgard.

Finally meeting face to face, the Dragonlord was unimpressed with the Builder, stating they were nothing more than but a mere puppet of Rubiss. Privy to the Goddess' forsaking of the Builder near the end of Chapter four, he attempted to use this schism and uncertainty to cloud the child's mind when he was bested in his humanoid form. Offering half the world, the Dragonlord stated that the Builder's role in Rubiss's scheme had ended and they should not allow themselves to be a slave to one who had already abandoned them. Whispering with a forked-tongue, he sweetened the deal by promising that the land the Builder would inherit would not be one of ashen darkness that Alefguard has become, but one of light where they may build their own kingdom as they see fit. If the Builder refuses the offer, the Dragonlord points out that if they fail to defeat him, then all the towns, villages, and friends they have made will be rent asunder.

Luckily, despite still being unsure about the Builder's ability to actually defeat the tyrant, Rubiss came to their aid, teleporting during the final confrontation with the Dragonlord's true form the various friends the youth had made during their quest, who themselves provided the Builder the necessary resorces to counter each of the dreadful Dragonlord's attacks, until the dragon was finally at last slain for good and the Sphere of Light recuperated.

He is an unlockable playable character in this with Square-Enix game collaboration with Nintendo.

The Dragonlord appear as an antagonist to The N Team, and worked with Mother Brain in his first appearance. He appeared in:

It has been suggested that this article or section be merged with Ryūō (Emblem of Roto). (Discuss)
A spoiler draws near! Click 'show' to display, otherwise run away!
Ryūō (Emblem of Roto) is revealed the be the Dragonlord during the final chapter of the manga.
Thou hast defeated the spoiler. 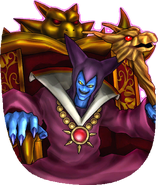 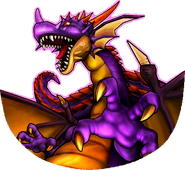 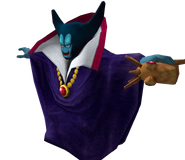 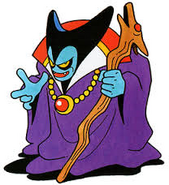 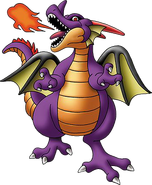 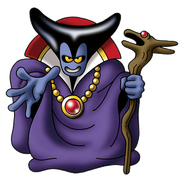 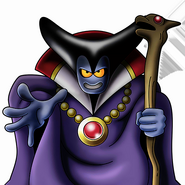 The Dragonlord, as seen in Dragon Quest of the Stars