The dragonsbane is a powerful sword in the Dragon Quest series. True to its name, it deals 50% more damage to creatures from the dragon family in nearly every game it appears, and this multiplier will stack with skills, such as Dragon Slash and Flame Slash.

There have been two distinctive designs for the sword throughout the series. From its debut in the second game to Dragon Quest VII, the dragonsbane consisted of a metallic blade similar to the real-world katar, a type of punching dagger from the Indian subcontinent that is held in the wielder's knuckles. The user's wrist was protected by an intricate design shaped like a green dragon's head with gold edges and red jewels set like eyes and two curved horns on either side. The blade has four grooves on each side. Although the weapon has some similarities to the claws used by martial artists, it was always classified as a sword.

Starting with Dragon Quest VIII, the dragonsbane's design changed to a conventional longsword, likely due to the fact that the games were now in 3D and the animations for swords were all made uniform. The new design for the dragonsbane is much like a scimitar, featuring a green blade with curved metal edges, a red grip on the handle, and a dragon's fang on the sword's pommel. The sword's crossguard also featured a stylized dragon's head with red jewels for eyes and two curved golden horns much like the previous design and the sword also had various gold decorations on the blade and handle.

The sword has appeared in every game in the main series since Dragon Quest II and has even showed up in multiple spinoff games, as well.

The dragonsbane can be purchased for 8,000 gold. It has an attack bonus of +50 and can only be equipped by the Hero, though it is merely a strong weapon without any extra capabilities in its debut.

The sword starts to deal extra damage in this installment, but instead of the familiar +50%, it instead deals 16~32 extra points of damage, calculated separately from normal damage equations. This means that the effects of oomph will not increase the range to 32~64.

The dragonsbane has an attack bonus of +90. It can be bought for 15,000 gold in Rosehill and Riverton and sold for 11,250 gold. The Hero, Ragnar, and Psaro can equip it. IV codified the percentage-based effectiveness of the sword, and allowed for the bonus damage to be effected by attack augmentation.

The dragonsbane has an attack bonus of +90. It cannot be purchased until generation 3 though, at Whealbrook and Precaria, and it's not cheap either (15,000 gold).

NOTE: The dragonsbane multiplies damage differently depending on which version of V is being played. In the SFC version it uses the standard 1.5 multiplier, 2.0 in the PS2 remake, and 2.25 in the DS remake. The likely reasons for these improvements is response to fan criticism of the Metal dragon, Black dragon, and Great dragon enemies' obscene strength compared to average player level when first encountered.

The dragonsbane has an attack bonus of +83 and a style bonus of +35. It can be equipped by the Hero, Kiefer, and Aishe. It can be purchased for 20,000 gold at Buccanham and the Dwarves' Den in the present and sold for 10,000 gold. It deals 1.5 times more damage to dragons. Dragonsbanes can also be won as prizes from the Lucky Panel at the Buccanham Casino.

The dragonsbane has an attack bonus of +72, and deals 30% more damage to dragons. It can be upgraded into a dragon slayer in the Alchemy Pot by combining it with a mighty armlet and can be equipped by the Hero and Jessica, provided she can use swords. It can be bought for 11,000 gold in Orkutsk and Tryan Gully and sold for 6,000 gold.

Can be made into a Dragon Slayer when alchemized with a Mighty Armlet.

Mandrake marshals will drop them rarely. 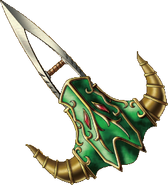 DQIVDS artwork.
Add a photo to this gallery

Retrieved from "https://dragonquest.fandom.com/wiki/Dragonsbane?oldid=171474"
Community content is available under CC-BY-SA unless otherwise noted.