Elves are a recurring race in the Dragon Quest series. Their pointed ears suggest they are based at least in part on the creations of J.R.R. Tolkien.

Elves play a substantial role in the story of IV, being the original impetus of the world-shaking events.

In Chapter 2, Alena and co. see an elf named Oopsy and her sister Daisy at the top of Birdsong Tower. Though the pair leaves as soon as they see the party, they mistakenly leave behind a phial of Birdsong Nectar that is necessary to restore the voice of the Tzar of Zamoksva's supernatural silence.

Later, in Chapter 5, the party will meet Rose, an elf who was hunted by humans because her tears transmutate into small rubies. Her lover is Psaro, the game's main antagonist, whose resolve to crush humanity is fortified after saving the lass from a trio of bandits. The master of monsters builds a tower to protect his love, around which the town of Rosehill grows. A few other elves also live in Rosehill, as it gradually became a shelter for dwarves, talking animals, civilized monsters, and other supernatural beings from the machinations of greedy and malicious humans.

Towards the end of the game the party will also travel to Yggdrasil, at the roots of which the elves have built their main city, El Forado. As Yggdrasil grows in a vast desert barricaded on all sides by colossal mountain ranges, the elves of El Forado are safe from the worst of humanity and do not shun the chosen ones. Oopsy, Daisy, and an unnamed third elf are also seen again in Zenithia's garden.

After the chosen ones defeat Estark at his tomb in Mamon Mine, one of Psaro's lieutenants will inform him that Rose has been slain, claiming it was done by humans. In reality, it was Psaro's second in command, Aamon, who arranged for the girl's death; he desired for Psaro to give into blind rage and allow himself to become more easily manipulated and thus allowing Aamon to rule monster-kind from behind the figurative thrown. With the loss of his love, Psaro gives into despair and utilizes the secret of evolution to become a hideous beast with enough power to crush all of humanity.

In the distant past, during the Lord of Darkness' assault on the world, the great sage Kupas saved the lives of an elf and a Gigantes. The elf's name was Raya, and she and the gigantes pledged allegiance to Kupas in gratitude, becoming his inseparable traveling companions. As the lives of humans are brief compared to elves and monsters, the duo honored Kupas' dying wish by founding the village of Tryan Gully, where elves, humans, and peaceful monsters could co-exist together.

The hidden community was also dedicated to preserving the memory of the dark lord reign of terror, with several inhabitants having first-hand knowledge of those infernal times. Speaking to Raya herself is also important to advance the game's story, as she bequeaths the darktree leaf to the party in order to track down the fiend before his resurrection can be completed.

Being the sole elf the player can speak to in the game, Raya is a strong departure from former elves, having neither the fearful suspicions of humans as past elves nor childlike mischievousness of the faeries. She has great respect for the seven legendary sages, being awed by their courage in standing up to a world-ending threat, and this as given her a positive outlook on humanity in general. Being the leader of her hidden hamlet, she welcomes the party warmly.

Elf is a race that can be chosen for the player's character in Dragon Quest X. Prior to version 3.2 of the game, elves boasted the highest magical mending and second highest magical might development of the playable races as well as a 20% resistance to all wind-based skills and spells.

After starting out as a human, the player may become this race or any of the other seven races, including Ogre, Dwarf, Poppet, or Wetling. 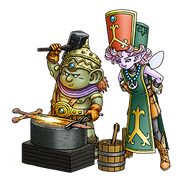 A soldering male Dwarf and a male Elf, as a Priest, watching over. 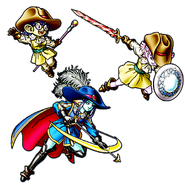 An Elf, Poppet, and a Human as Paladins in DQ X 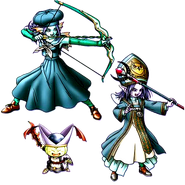 A Wetling, Poppet, and Elf as Sages in DQ X 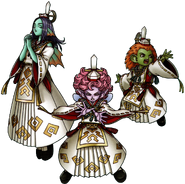 A Wetling, Dwarf, and Elf as Druids in DQ X 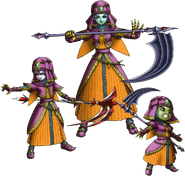 A Elf, Dwarf, and Wetling as Death Masters in DQX
Add a photo to this gallery

Retrieved from "https://dragonquest.fandom.com/wiki/Elf?oldid=187353"
Community content is available under CC-BY-SA unless otherwise noted.