For the character in the Erdrick trilogy, see Hero/Heroine (Dragon Quest III).

Either male or female

Dragon Quest
Erdrick, known in Japan as Loto, is an honorary title given to legendary heroes and frequently mentioned in the Dragon Quest series.

The title serves as a major connecting point between Dragon Quest III and both Dragon Quest I and Dragon Quest II (along with Alefgard), as a result, the first three games in the series are often referred to as the Erdrick trilogy (or Loto Trilogy).

Erdrick's emblem is modelled after Ramia's own shape, due to the hero's role in hatching the egg of the sacred bird capable to travel across dimensions.

While Erdrick does not appear in the game, the Hero is their descendant. They have a cave named after them (Erdrick's Cave), in which a monument/tablet can be found. The Hero can also find their sword and armour during the course of the game. Finally, the hero must find their seal in order to prove that Erdrick is his ancestor.

The Hero/Heroine is given the title after defeating Zoma and saving Alefgard. They are the ancestor of the Hero in Dragon Quest.

Erdrick is mentioned, with an armour set named after them. These are all four star items and are made by alchemising one rusty set piece (eg. helmet, shield, sword etc.), nine Glass Frits, and an Orichalcum The rusty set pieces are obtained in various ways:

This set of armour is one of the best in the game, second to only the Alchemiracle armour.

Additionally, the "Aliahan" armour set obtained from the legacy bosses Baramos and Zoma is derived from Erdrick's original appearance in III.

The Luminary is given the title Erdrick by the Yggdragon as an honour for defeating Calasmos and ridding the world of evil. Here, it is revealed that he is the first to bear the title, showing a flash-forward to the hero of Dragon Quest and the hero of Dragon Quest III years later. In addition, a woman in Cobblestone makes mention of her favourite story character being named Erdrick. Dragon Quest XI also reveals the origins of two of Erdrick's equipment pieces.The Sword of Light was originally forged by the Luminary's predecessor, Erdwin at a sacred forge in Mount Huji. The forge overhead resembles the seal of Erdrick. The exact origins of Erdrick's shield are unknown, but it is known that Erdwin once wielded it. It somehow fell into the possession of Monsieur Professeur le Principal Maxime Médaillé, who rewards the Luminary with it after bringing the maximum amount of mini medals. Interestingly enough, although Erdwin was never mentioned to hold the title of Erdrick, his Hero's shield still has the word "Loto" written on it, which is the Japanese equivalent of the title. This implies there may have been one to bear the title before him.

The evil Gisvarg is after something called the Power of Erdrick to achieve his malevolent goals, spreding rumors that the Power could grant wishes so that someone naive enough could lead him to it. He also corrupted Magarugi, the leader of the elementals so that her would aid him in his search. 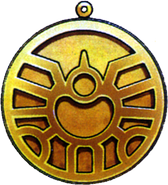 The Mark of Erdrick, upon which it is prominently engraved the Emblem of Erdrick

Erdrick's appearance from the manga series, Emblem of Roto