Erdrick's sword (Sword of Erdrick, Loto's Sword in the GameBoy remakes) is a powerful sword featured in the first three games in the Dragon Quest series that once belonged to the legendary hero, Erdrick. The name returned to being called Erdrick's sword for the games later released on Android and iOS.

In Dragon Quest, Erdrick's sword is the most powerful sword in the game. It is hidden in Charlock Castle.

Erdrick's sword is the most difficult item in the game to get. It's located deep in the bowels of Charlock Castle. To get it, go into Charlock Castle and walk directly behind the throne and search. A staircase will appear. Go down the stairs to the next floor. Follow the path to the only staircase on that floor. On the next floor do the same thing. There is only one staircase that you can reach. The next floor is more complicated. Start by going to the right as far as you can, then go down and take the first right. When you can't go right any further, go up until you can't go up any further. Now go left until you can't go left any further. Then go down and take the last staircase. At the next floor, work your way to the bottom right hand corner. Now go up until you see a passageway. Do not go down this one. Instead, go left for two steps and then down along the other side of that wall. You will see a staircase going up. Follow the path until you reach another staircase, as there is only one on this path. Go down the stairs and you will easily see the next staircase to take. On this floor there is only one staircase, but the path is longer. When you go down the next staircase, you will see a treasure chest. Erdrick's Sword is contained within!

In II, Erdrick's sword is known as Sword of Erdrick and it is once again located within Charlock Castle. Unlike Dragon Quest however, the Sword of Erdrick is not the most powerful weapon in the game (possibly because it is rusted or blunted).

In III, Erdrick's Sword is called the Sword of Kings. You get it from a merchant in Kol after giving him the Orichalcum found in Damdara in a pasture. While being an extremely powerful weapon, it is not the most powerful weapon in the remakes, the Sword of Rubiss is.

In IX, a Rusty Sword can be found in the Realm of the Almighty or (In June 2011) via DQVC. This can be used to create Erdrick's Sword when alchemised with a piece of Orichalcum and nine Glass Frit.

A well-known weapon once wielded by a legendary lionheart.

The Rusty sword must be refurbished through alchemy.

In XI, a sword identical to Erdrick's sword appears as the legendary Sword of Light (勇者のつるぎ - Hero's Sword in Japanese) wielded by the Luminary's ancestor, Erdwin, during the Age of Heroes.

It is initially safeguarded within the Heart of Yggdrasil where it awaits the Luminary, but is transformed into the Sword of Shadows when Mordegon steals the power of the Luminary and corrupts the blade. Later, the hero and his companions successfully forge a second Sword of Light with which to destroy Mordegon once and for all. This new sword, along with the Sword of Shadows, is shattered and later replaced by the original (called "Super") Sword of Light during the post-credits storyline after the hero travels back in time and successfully prevents Mordegon from taking the sword and destroying the Heart of Yggdrasil.

Curiously, the Sword of Kings, while previously an epithet for what would become Erdrick's Sword, makes its own separate appearance in this game, featuring a design that slightly differs from the Sword of Light. This Sword of Kings is practically identical to the one from III, from casting Kaswoosh when used as an item in battle, right down to being obtainable after selling a lump of orichalcum to an NPC hailing from the game's Japan-inspired region of the world (Hotto and Jipang, respectively).

Erdrick's Sword alongside his helmet and shield. 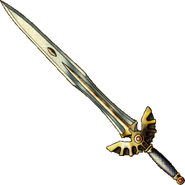 Retrieved from "https://dragonquest.fandom.com/wiki/Erdrick%27s_sword?oldid=179847"
Community content is available under CC-BY-SA unless otherwise noted.