For the title, see Erdrick.
For the Arus character of Emblem of Roto, see Arus.

The Hero/Heroine (Male in original NES version, either male/female in remakes) of Dragon Quest III is the son/daughter of Ortega who is sent to destroy the Archfiend Baramos before he can destroy the world. Unexpectedly, they will find their quest expanding beyond their wildest expectations and will take on unexpected challenges before reuniting with their father. Upon their journey's end, the Hero/Heroine is given the title "Erdrick".

The Hero's name is up to the player, a Dragon Quest staple, but the official guidebook (公式ガイドブック) names are Arusu (アレル) for the male and Irin (アイリン) for the female. In the Dragon Quest III CD Theater audio and Emblem of Roto manga, his name is Arel (アレル).

Although the hero can be either male or female, their appearances are practically identical. They are of average height and build, and they have incredibly spiky, dark brown hair. The heroine is slightly shorter than her male counterpart, her hair sticks up less, and she wears a pair of green earrings. Around their forehead is a silver circlet inlaid with a green gem. They wear a long blue tunic over a yellow long-sleeved shirt and pants, a pair of knee-length leather boots, leather gloves, and a long purple cloak around their necks. They wear a brown leather belt around their waist, and a scabbard strapped to their back.

The hero wields a simple sword and a grey heater shield with an insignia of a dragon's head and two crossed swords on the front. The hero's outfit is slightly different in the Famicom illustrations, having a gold circlet with a blue gem around their forehead, and a dark blue cloak around their neck. They are seen carrying a cutlass and a round version of Erdrick's shield. There were also no illustrations of the heroine until the Super Famicom remake: in certain illustrations, the heroine's outfit is more feminised, making her blue tunic a strapless miniskirt.

Keeping with Dragon Quest tradition, the Hero/Heroine is a silent protagonist, they have no actual lines of dialogue, their personality is dictated by the player, though they are often praised and celebrated for their courage and heroism, being pillars of goodness and bravery, taking on impossible tasks and coming out on top through many hardships and tribulations.

What makes them different from most Dragon Quest heroes is that in the SFC and later versions, their personalities are tested by the “Ruler of Everything”. They are asked a series of questions by the disembodied voice before being taken to one of several scenarios. How they act through the scenario will dictate their personality. They have several possible personalities attributed to them afterwards, ranging from positive ones such as being valiant, diligent, fearless, agile, smart, lucky, among others, to less positive ones such as cowardly, stubborn, lazy, helpless, naive, selfish, etc. Some personalities are even gender exclusive, for example, only the Female Hero can have the Vamp personality. It should also be mentioned that these personalities affect only the stat growth of the Hero, not any dialogue in game or even the story.

The Hero was raised by their by their mother and grandfather in their home in Aliahan. Their father, the renowned warrior Ortega, was tasked by the king of Aliahan to assassinate the world-threatening archfiend Baramos on the very day of their birth. Some time later, word of Ortega's supposed death reaches the kingdom and the Hero's mother proposes that her child can follow in Ortega's footsteps to free the world from Baramos' growing menace. The child is then trained to become a great warrior like their father and, on their sixteenth birthday, they officially depart to save the world. The king gives a word of warning to take companions with them on their quest lest they meet the same fate as their father, and instructs them to visit Patty's Party Planning Place before leaving the safety of Aliahan.

The king of Aliahan has discreetly sent word of the Hero's journey to the monarchs of every major nation--this is why the kings and queens warmly receive them even though the citizenry knows nothing of their mission. The Hero encounters several towns and kingdoms throughout their journey and accomplishes many feats of heroism, such asmending the wounds between the Faeries and the people of Norvik and freeing the nation of Jipang from the deceit of a sinister serpent. Six legendary orbs are gathered by the Hero along their trek, which they use to hatch the legendary Everbird Ramia. The phoenix is the direct servant of the Goddess, and her camaraderie with the Hero is irrefutable proof of their destiny as the savior of the world. Additionally, the Hero encounters the dying Queen of Dragons in her remote mountain castle. Before she succumbs to her age, she gives the Hero the Sphere of Light and reassures them that their destiny is one of great courage and hardship for the benefit of the entire world.

After defeating Baramos, the Hero returns victorious to Aliahan, only to be confronted by a new nemesis, Zoma. Taking up a new quest to defeat the true evil, the Hero travels through the Great Pit of Giaga to the world below and arrives in Alefgard, which is sealed in perpetual darkness under the devil's heel. Here, the Hero fights back against the eternal night by freeing the entrapped Goddess Rubiss and besieging Zoma's castle. Against all odds, the Hero encounters their father fighting in the depths of the castle--Ortega had fallen into the world below during his fight at the crater of a volcano and resumed his mission by seeking to kill the evil plaguing both worlds at its source.

Tragically, Ortega is mortally wounded in a battle with the King Hydra before he can even reach Zoma, and is so severely burned by the dragon that he can no longer see. Sensing someone is present, Ortega embraces his death with despair and bemoans his inability to bring peace to his world and that he was never able to see his child grow up. Ortega then quietly dies in the Hero's arms.

Reaching the lowest level of the castle, the Hero kills the king hydra before fighting through the animated corpse of Baramos and the fiend's very soul on their way to Zoma's throne. The devil mocks the would-be saviour and the battle begins, with Zoma's impenetrable shroud of darkness being burned away by the sphere of light and leaving him vulnerable. After a vicious clash the Hero emerges victorious, and Zoma begins to fade away--warning them that even though he may perish, there will always be another evil to take his place.

The castle begins to collapse due to the force of the battle, and the Hero emerges from the Nail Mark north of Tantegel. The light of the sun has begun to shine in Alefgard for the first time in untold years, and the people receive the Hero as nothing short of a messiah sent by the Goddess. The king bestows upon them the title of Erdrick, the most sacred honour that the land has, and the stratum gap between the world above and Alefgard closes before the Hero can return. Unable to rejoin friends and family above, the Hero settles down in their new home and begins a family that will continue their legacy of standing resolute in the face of desolating evil.

The Hero learns a mix of Priest and Mage spells, often learning them much later than either class, but they also learn some unique spells. The Hero's MP growth is rather weak and they won't be able to cast many spells in the beginning of the game they won't be able to do much, usually just reserved for attacking and only using magic when other party members are out of MP.

In this game’s true ending after Serenica is shown to reunite with Erdwin, the beginning of Dragon Quest III is shown, with III's Hero appearing at the end to be awoken by their mother before setting off for Aliahan castle. Their mother was shown reading a red book that detailed the adventure of the Luminary before walking upstairs to awaken their child--whether this book is a historical account or a work of fiction is unknown.

The Hero of Dragon Quest III appears as a costume for the Hero, along with the Heroes of XI, IV, and VIII. While playing as the Hero in Classic Mode, he appears as the opponent of Stage 6, set on the third version of the Castle Seige stage.

The Hero's bloodline is that of powerful men and women who save the world from the grips of darkness. While every person descended from them carries their spirit, the most notable are the protagonists of the first and second games. These are the Scion of Erdrick, the Prince of Midenhall, the Prince of Cannock, and the Princess of Moonbrooke. Their own adventures would shape the course of history for the betterment of the world, and insures that the name of Erdrick never leaves the heart of Alefgard.

Prince Arus, Prince Jagan and Asteea from Emblem of Roto are also descendants of him.

As the Hero's legacy has grown in the distant time between the third and first game, several items and pieces of equipment that once belonged to the Hero have Erdrick in their names.

Beyond the gear the Hero took into battle, they also left behind a tablet with a message written left for their descendant in Dragon Quest. It gives instructions on what items are needed to create the Rainbow Drop, which is need to reach Charlock Castle. The tablet is found in a a small cave that would be named Erdrick's Cave after their passing. 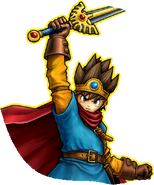 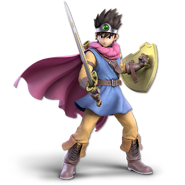 Retrieved from "https://dragonquest.fandom.com/wiki/Erdrick_(Dragon_Quest_III)?oldid=194715"
Community content is available under CC-BY-SA unless otherwise noted.