Erinn is a character in Dragon Quest IX. Initially running the inn at Angel Falls, she is later recruited by Patty to take over her father's old establishment in Stornway, the Quester's Rest.

She is first seen during the opening scene, walking down the road with her grandfather back to Angel Falls. Unseen, their Guardian, the hero, and his/her mentor Aquila are watching and prevents a group of monsters from harming them. Unlike the other villagers, she believes in the Guardians and issues a prayer, bestowing Benevolessence.

Later, she discovered the hero at the base of the waterfall after the earthquake, and took him/her in to recuperate at her house. She was astonished that the mysterious minstrel bore the same name as the Guardian of Angel Falls, but was unaware that it was the same being. The next day, when Ivor and the hero went to investigate the landslide at the pass east of the village, she became concerned when she learned that a "Patty" from Stornway went missing in The Hexagon ruins, having remembered her father mentioning the name. To ease her concerns, the hero went to the ruins to rescue the woman.

Back at Angel Falls, Patty tries unsuccessfully to convince Erinn to take over her father, Edwinn's, pub in Stornway, believing she has her father's talent. That night, the hero was able to recover Edwinn's "Inny" award with the help of his ghost. Her grandfather reveals that since Erinn was quite a sickly girl when she was younger, as her mother was (who died due to her sickness), Edwinn had moved to Angel Falls so she could drink from the healing waters. Erinn decides to accept Patty's offer after realizing how much her father sacrificed for her.

Once the pass was cleared by King Schott's soldiers, Erinn and Patty leave for Stornway, offering the hero to visit her at the Quester's Rest.

At the Quester's Rest, the other employees were highly skeptical that the young girl could salvage their business, until she presented her father's Inny award. Once she got settled in, Patty suggested hiring the hero to help promote business for Erinn. For this reason, she gives the hero an employee discount for staying at the inn.

Later, after the hero settles the Wight Knight affair, Erinn tells the Hero that she discovered an old alchemy pot, aptly named Krakpot, that was left behind by a previous customer as "payment." Not certain about what else to do with it, she decided to let the hero use it for alchemical pursuits, instantly making it a valuable asset for creating weapons, armor, and many other goodies.

After Quest 157 "Inn For A Penny, Inn For An Inny", she becomes available as a party member.

She appears as part of the Dragon Quest IX story event. 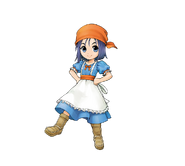 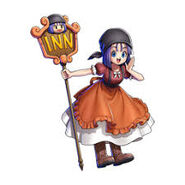 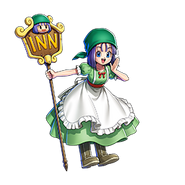 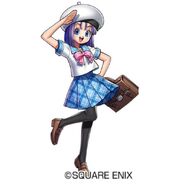 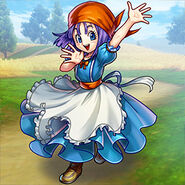 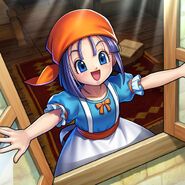 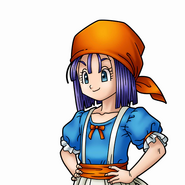 Retrieved from "https://dragonquest.fandom.com/wiki/Erinn?oldid=195699"
Community content is available under CC-BY-SA unless otherwise noted.